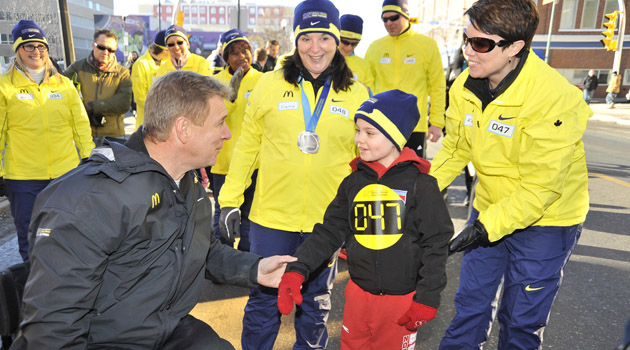 Rick Hansen himself won't be there, but his anniversary tour stops by the Canada Education Park on Monday, May 14.

Twenty-five year ago Rick Hansen set out in his wheelchair to travel around the world to raise awareness about spinal cord research. Now, the man who has become a Canadian icon is back at it making sure his message, just like his wheels, is still in motion. His anniversary tour will stop by UFV next week.

The idea behind the 1985 Man in Motion World Tour was to teach the world that people with disabilities could do anything they set their minds to do. Hansen also wanted to help promote the importance of accessible and inclusive communities, and to raise money to find a cure for spinal cord injuries. His journey lasted 26 months, covered more than 40,000 kilometres, and travelled through 34 countries.

While research on spinal cord injuries has made leaps and bounds over the past two decades there is still a long way to go. Hansen thought the best way to mark the 25 year anniversary of his Man in Motion tour, and to add new life to his message, would be to retrace the Canadian portion of that journey. To make it a bit different, he invited more than 7,000 ‘medal bearers’ to participate with him in different segments across Canada.

The anniversary tour began in August in Newfoundland and will conclude in Vancouver in a few weeks. The tour comes to Chilliwack and Abbotsford on May 13, 14, 15 and the University of the Fraser Valley is getting set to take part in this historic relay.

“When we learned the tour was coming through Chilliwack we thought a stop at UFV’s new building would be a great way to help showcase that the university is growing and expanding its campus at Canada Education Park.”

UFV staff contacted relay organizers, and while Hansen himself is booked to be elsewhere that day, the tour will now go past the Trades and Technology Centre, and include with a stop outside UFV’s new building located at 45190 Caen Ave in Canada Education Park, on Monday, May 14 at 11:30 am.

Stephanie Park, 18, has been selected to be the medal bearer as the tour enters the Canada Education Park. The Maple Ridge resident is a UFV student with dreams of being an elementary school teacher.

“I am honoured that I was chosen out of all UFV students to represent the school at this event. Rick Hansen has been an inspiration to me for many years and to get to participate in an event to recognize him is fantastic!”
Kara Bertram, UFV’s international student program facilitator, will also be participating as a medal bearer along Evans Road in Chilliwack. Kara completed a master’s degree in adapted physical activity at the University of Alberta prior to taking her current position at UFV in 2007.

“I am very excited to be selected as a medal bearer for the tour.  This opportunity brings together my past academic interests with my love of fitness and activity.  The goal is to challenge others in the community to make a difference.”
The 25th Anniversary of the Man In Motion World Tour pulls into Chilliwack at about 4 pm on Sunday, May 13. The city is planning a celebration that will take place at Heritage Park. The next day, the tour will travel south through Sardis to the Canada Education Park, and then head through Yarrow towards Abbotsford.

On Tuesday, May 15, a day of rest for the tour, UFV’s Abbotsford campus will host a wheelchair basketball game at the Envision Athletic Centre, north gym, at 1 p.m.

Participants in the basketball game will be a combination of UFV varsity athletes, students, faculty, and staff who have volunteered to try their hand at this challenging sport. The university has arranged the rental of wheelchairs so lots of people can participate in the event.

The basketball game is a free event and open to the public; however, there is a parking fee at the UFV campus.
-30-