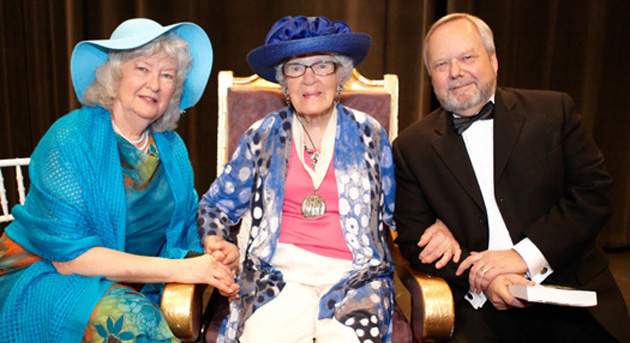 The University of the Fraser Valley helped Jean Scott celebrate her 100th birthday in style on April 20, a day before her actual birthday, which she shares with Queen Elizabeth (but has seniority).

The event, dubbed Jean’s Jubilee,  was a fundraiser for the Jean Scott Endowment Fund and was held at the Rotary Hall studio theatre at the Chilliwack Cultural Centre. Scott received an honorary doctorate from UFV in 2002 in recognition of her lifetime’s work in the areas of social justice and women’s rights.

The party raised $10,000 for the Jean Scott Endowment Fund, bringing the total from around $31,000 up to slightly more than $41,000, well on the way to goal of a $50,000 endowment that would permanently fund generous annual scholarships for students in the social justice field.