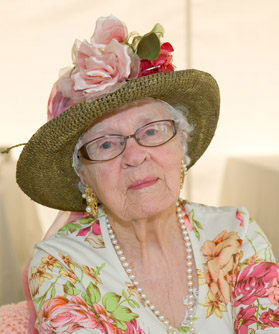 What were you doing 100 years ago? If you’re like most of us, you were a long way from conception. But if you’re Jean Scott of Chilliwack, you were busy being born, just one week after the sinking of the Titanic.

Scott, a well-known community activist and feminist who has made her mark both locally and nationally, will turn 100 on April 21. The University of the Fraser Valley, which conferred an honorary degree on Jean in 2002, is throwing her a celebratory birthday party on Friday, April 20, from 2 to 4 pm at the Rotary Hall studio theatre at the Chilliwack Cultural Centre on Corbould Street.

Since Scott shares her birthday with Queen Elizabeth (but has seniority by 14 years), this year’s party will have a royal theme.  Dubbed Jean’s Jubilee, it will be a ‘very proper party’. Hat and gloves are optional, and there will be a booth to borrow them from at the event.

Anyone in the community who knows Jean (even peripherally) and would like to attend, is invited to do so if they rsvp.  Jean’s Jubilee is a fundraiser for the Jean Scott Endowment Scholarship, which awards a scholarship annually to a UFV student. The aim of the scholarship is to assist in improving women’s lives in Canadian society through support of education relating to social and political issues that impact women’s equality.  If you would like to attend, please rsvp to Kandie Husband of UFV’s Development office at kandie.husband@ufv.ca  or by calling 604-792-0025, and asking for local 4595.

Scott has requested neither gifts nor birthday cards; she asks that each attendee make a donation to the UFV Jean Scott Endowment Scholarship. Donation forms will be available at her party. Should you be unable to attend, please call 604-854-4595 to make a donation over the phone. Or you can make an online donation by visiting ufv.ca/giving and clicking ‘Donate Now’.

Marian Dyck of Chilliwack has supported the Jean Scott Scholarship for several years, making a donation annually. She encourages the community to get behind this scholarship, which helps empower students to prepare to serve their communities in the sphere of social justice.

“I support the scholarship not only to honour Jean but also to ensure that the next generation of young women and men is prepared to continue to work for social justice,” she said.
Given that Scott is turning 100 this year, Dyck suggests that $100 donations would be appropriate to mark the occasion. The university will of course gratefully accept donations in any amount.

The endowment currently sits at $31,000 and the goal for this year is to increase that amount to $50,000 in celebration of Jean’s centennial year. This would fund a generous annual scholarship in perpetuity.

“Jean is a real friend of UFV and an important Canadian,” said UFV president Mark Evered. “We want to celebrate her many decades of achievement and mark her 100th birthday in a very memorable way.”

In 1990, Scott received the Governor General’s Person’s Medal, which is presented annually to Canadians who have earned respect through their contributions to the goal of equality for women in Canada. After a lifetime of struggle and achievement, and tireless dedication to social justice and many causes, Scott wrote and self-published her memoir in 2005. Brown Sugar and A Bone in the Throat is a compelling narrative of one woman’s journey through childhood poverty, the Depression, World War II, multiple romances and marriages, and several political movements.

These days, Scott continues to inspire people with her energy, her optimism, and her love of music and a good cause.  She lives at the Lynnwood Retirement Residence in Chilliwack with her geriatric cat, Nicky.

Eric Jordan to speak on education, technology and learning in the 21st century
Coast Capital donation sustains and enriches leadership at UFV