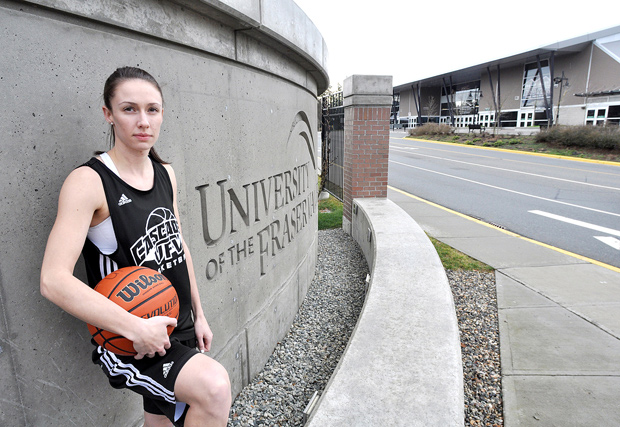 Tessa Klassen wishes more people would appreciate women's sports as exciting to watch, without it having to include playing in lingerie. Photo by Jean Konda-Witte

For the most part, University of the Fraser Valley athlete Tessa Klassen is puzzled by the very concept of the Lingerie Football League, which is going to be based in Abbotsford this fall.

Klassen, captain of the UFV Cascades women’s basketball team and last year’s MVP, has been playing competitive sports since Grade 7.

“I’m all for female athletes but I don’t really understand the concept, or why they should have to be in lingerie,” said Klassen.

“It just seems odd or sexist for females to dress down for the part. You don’t see male athletes dress down to play their sports.”

The Abbotsford Entertainment and Sports Centre will be the new home to the LFL’s second franchise team in Canada.

The still unnamed team will play in the LFL’s Western Division, which kicks off a 12-week regular season Aug. 25.

The league’s teams play seven-on-seven tackle football, but the decidedly attractive female players are garbed in bras, panties and garter belts, with only shoulder and kneepads and hockey-style helmets as safety gear.

Deemed amateur athletes by the league, the female players do not get salaries to play the game.

LFL founder and chairman, Mitchell Mortaza, said the league’s skimpy costumes aren’t any worse than those donned by volleyball players or swimmers.

The women who play for the league are former college-level athletes that have few other alternatives if they want to continue to compete at a high level in women’s sport, Mortaza said.

Fans may first be attracted to the sport because of the costumes but they remain loyal due to the intensity of the game and level of skill demonstrated by the players.

“These are competitive college-level athletes looking to tap back into a national stage,” Mortaza told the Times last week.

“They have the opportunity to play in major arenas and be sports heroes.”

Klassen questions what kind of sport heroes the LFL players would be, particularly to young female athletes.

“Being on a [university] basketball team, we are looked up to by younger girls and you are kind of a role model,” she said.

“It leads to some negativity for girls to aspire to play football in so little clothing. It kind of gives them the wrong idea.”

UFV Cascades women’s basketball coach Al Tuchscherer said the LFL is a form of entertainment that does nothing to support women who participate in legitimate sport.

“There are a lot of women playing at an extremely high level in all sports that this does a disservice to, as they are striving to achieve, in some cases, life-long goals,” said Tuchscherer.

“I think one of the barriers and debates to women’s athletics is getting beyond sexuality and enjoying the sport for the competition, athleticism, and teamwork.”

A father to two daughters and UFV coach to hundreds of young women over the past decade, Tuchscherer would rather have young female athletes emulate women like Theresa Gabriel or Christine Sinclair, members of the national basketball and soccer teams.

“They are considered amongst the best in the world and seem to hold the true spirit of sport when they compete,” he said.

UFV sociology instructor Martha Dow said there are two schools of thought when approaching events such as lingerie football.

One camp suggests endeavours like the LFL further objectify women while the other argues women are taking power and making decisions around their own bodies and sexuality.

“Those two positions are alive and well in this debate,” Dow said.

“But you have to worry about one more message to women that says to be successful, you have to take off your clothes.

“The message to young women is potentially a harmful one.”

It must be disheartening for university-level female athletes engaged in a high level of sport who are working hard to gain respect and no longer be seen as secondary athletic citizens, she said.

Klassen, who has never felt compelled to use her looks to achieve in sport, doesn’t dismiss the notion of a woman’s football league – just the means to popularize it.

“I would probably consider it if players were more fully dressed,” she said.

“But to have to draw fans in that way . . . if people are going to be really interested, they would come regardless of what the players were wearing.”