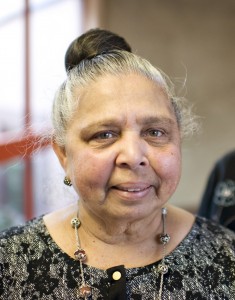 Dr. Patsy George returns to the University of the Fraser Valley next week as the first speaker in the 2012 President’s Leadership Lecture Series.
She will speak on Mon, Feb 20, in room B101 on the UFV Abbotsford campus. Admission is free and the public is welcome.

George is a social worker, women’s right activist, and community volunteer. Although retired, she remains a social activist with a keen interest in social justice and a strong desire to see improvement in the conditions of marginalized people, particularly those from Aboriginal communities.

She has received many honours and accolades including the Order of British Columbia (2002) and the Order of Canada (2007). And just last year, she received an honorary Doctor of Laws degree from UFV.

As a social activist with many decades of experience in the trenches, she’s not surprised by the Occupy movement that erupted in 2011, and sees it as the manifestation of a long-simmering frustration on the part of ordinary people.

“If you look at what has gone on in the last 10 to 15 years in the area of social justice, people are starting express a lot of anger and anxiety about the inequalities within our society,” George says. “These inequalities are getting worse, and young people are seeing that the government cannot guarantee them prosperity and that a small number of people are becoming extremely wealthy while the vast majority are seeing their prosperity decrease.”

George cites the Caterpillar Corporation’s recent decision to pull out of Ontario and relocate to Indiana when workers would not take a wage cut as an example of the disproportionate balance of power in an era of free trade.

“The CEO of Caterpillar makes $10.5 million and yet they were asking employees to take a significant wage cut, and our government was powerless to do anything about it. That’s the kind of environment we find ourselves in these days.”
George says that neither capitalism nor communism have worked perfectly to provide an equitable society for the majority of people, and that we need to find a “third way.”

“We need to find a way for people and communities to take care of one another and provide jobs and services, with government involvement, but also with the involvement of people in general,” she says.

The UN has declared 2012 the Year of Cooperatives to  raise public awareness of the contributions of cooperative enterprises to poverty reduction, employment generation, and social integration, and also to highlight the strengths of the cooperative business model as an alternative means of doing business and furthering socioeconomic development.

It’s a model that George likes.

“If you look back to the depression of the 1930s there are some wonderful examples of people working together to bring goods to market at a fair price or wage, such as the Antigonish movement among the fishers of Nova Scotia, or the wheat farmers on the prairies,” she says. Workers also grouped together to found stores and insurance companies to serve their needs.

George also hearkens back to the 1970s, when “there was more respect for social policies.”

“We didn’t separate economic growth from the social agenda, and there was more interest in and approval of the government supporting social projects, so that, for example, there were government-funded community initiatives that improved our communities and created jobs.”

At the heart of what George seeks is the dignity of the individual.

“We all deserve respect, whether we’re at home as a mother, cleaning someone’s yard, or working in a factory. And we all deserve a real living wage, not a minimum wage that can’t support a family.”