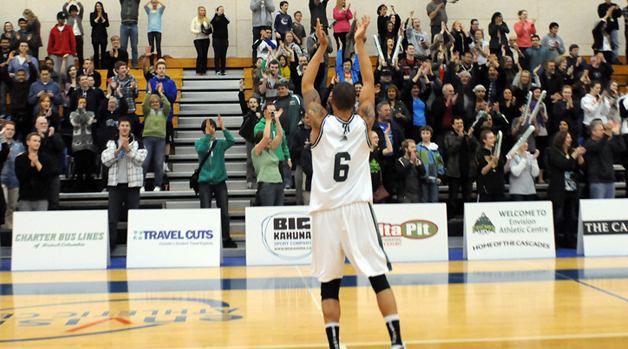 It was an unforgettable weekend for UFV Athletics as the men’s and women’s basketball teams advanced to CIS Canada West Final Four action after winning quarterfinal best-of-three series at home, and the women’s volleyball team qualified for the CCAA national championship with a silver medal at the PacWest regional championship. 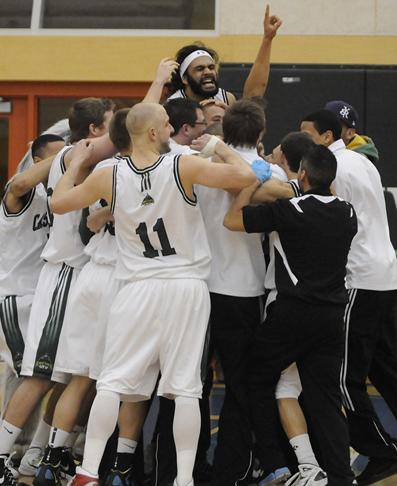 The UFV Cascades defeated the University of Lethbridge Pronghorns, 69-68, on a Joel Friesen three-point shot at the buzzer to advance to the Canada West “Final Four” for the first time in the team’s six year affiliation with Canada West. The Cascades will now travel to Saskatoon to compete in the Final Four hosted by the University of Saskatchewan Huskies.  The Cascades regular and post season record now improves to 15-6.

It was a thrilling series for the Cascades, with both the Friday and Saturday games being real nail-biters, the outcome not determined until the final minutes, or in the case of Saturday’s game, seconds. See Joel Friesen’s amazing ‘buzzer beater’ shot here:

The Canada West “Final Four” schedule will be announced on Mon, Feb 27. 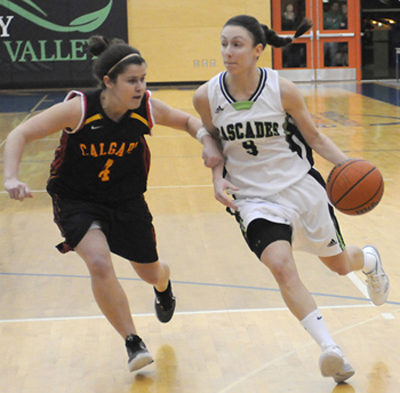 The University of the Fraser Valley Cascades women’s basketball team defeated the University of Calgary Dinos, 85-67, to win the Canada West quarterfinal best-of-three series two straight.  The Cascades will now move onto the Canada West “Final Four” tournament at the home of the highest seed remaining after this weekend’s quarterfinals are complete.  This marks the second straight year UFV has swept through the Canada West quarterfinals and marks the first series win at home, in the Envision Athletic Centre.  The Cascades regular and post-season record now improves to 14-6.

The Cascades were led by Tessa Klassen, Winnipeg, Manitoba with 21 points, team leading 6 boards and 5 assists. The fifth year veteran said goodbye to the UFV faithful with a monster of a game.  Sarah Wierks added 15 points and 6 boards, while Aieisha Luyken, Mission, BC and Nicole Wierks, Chilliwack, BC scored 13 points each.  The Cascades out rebounded the Dinos 40 to 32 for the game.

The UFV women’s volleyball team earned a berth in the 2012 CCAA national championship tournament at VIU by defeating the Capilano Blues, 3-1, in the PacWest championship semi-final. The women came into the tournament the number two seed after finishing second with a 20-4 regular season record, they earned the PacWest silver medal when they fell to the VIU Mariners, the number-one ranked team in the CCAA, 3-0.

The Cascades women’s team has had an excellent year nationally ranked in the CCAA top ten poll the entire season, currently 4th in Canada at the college level. The Cascades have been the recipients of several regular season awards as Kayla Bruce, Surrey (week of October 30) and Krista Hogewoning, Delta (November 7) were named PacWest female volleyball athletes of the week. Bruce was also named the PacWest female volleyball athlete of the month for December, 2011.

The UFV Cascades Bruce has been selected the 2011-12 PacWest female volleyball Player of the Year. Bruce is joined by two other women’s players Brittany Stewart, Walnut Grove, BC and, Jenna  Evans, Abbotsford, BC as PACWEST all-stars. The Cascades also have one member of the team named to the PACWEST all-rookie team Krista Hogewoning.

The match was close between the two arch rivals through the first two sets with UFV having a great chance to pull even in the second set.  The Bearcats won the third set by 11 points as they advance to the PacWest semi-finals against Douglas College on Friday.

“The team played well in the first two sets.  CBC are more experienced and were able to defeat us in the third set,” said UFV head coach Greg Russell.