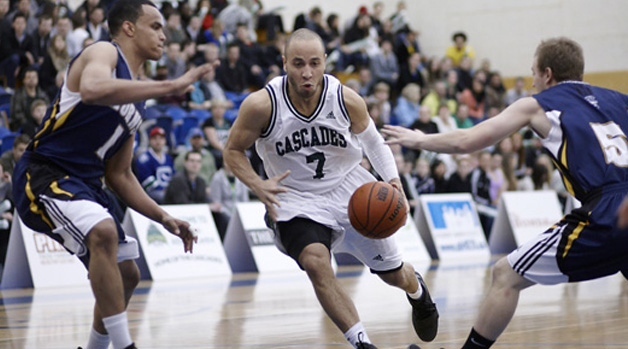 You may not be able to travel to Saskatchewan (Saskatoon for the men; Regina for the women) to catch your basketball Cascades in action this week, but you can watch them on your computer thanks to the wonders of the internet.

Catch the Cascades on CanadaWest.TV

The UFV Cascades men’s and women’s basketball teams Canada West Final Four games will be broadcast on CanadaWest.TV this coming weekend.  Catch all the exciting hoops action by logging onto www.ufv.ca/athletics and clicking on the CanadaWest.TV link on the front page of the Cascades website. 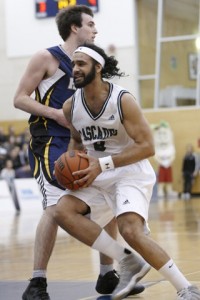 The Cascades men’s basketball team will travel to Saskatoon, Saskatchewan where they will face Pacific Division rival the University of Victoria Vikes in the first Canada West semifinal. During the Canada West regular season the Cascades split their two conference games with the Vikes, winning 79-70 and falling 91-67; both games were played in Victoria.

The Vikes come into the semi-final as the Pacific Division champions with a 14-4 regular season and 16-5 overall record including their playoff series with the University of Calgary Dinos, who they beat at the buzzer in game three on a layup. UFV comes into its first ever Canada West Final Four semifinal fresh off Joel Friesen’s three-point shot at the buzzer that gave the Cascades game three with a 69-68 victory over the University of Lethbridge Pronghorns.  The Cascades are now 15-6 in regular and post-season play. The winner of the semi-final game on Friday night automatically receives one of two Canada West bids to the “show” — the CIS national championship tournament, in Halifax, NS, weekend of March 9–11, 2012. The Cascades are currently ranked 4th in the CIS top-ten rankings and have been ranked the entire CIS regular season. The host Saskatchewan Huskies and the Alberta Golden Bears are the other two semi-finalists in Canada West.

The Cascades women’s basketball team will travel to Regina, Saskatchewan where they will face the Prairie Division champions and CIS number-one ranked team, the University of Regina Cougars. The Cougars sport an impressive 22-0 regular and post-season record, including their two-game sweep of the University of Winnipeg Wesmen in the Canada West quarterfinals.  In their only Canada West regular season meeting Regina defeated UFV, 78-61, in Regina.

The Cascades are coming off their sweep of the University of Calgary Dinos, at Envision Athletic Centre, their first home playoff series win in six years in the conference, their second straight quarterfinal playoff series sweep.  The Cascades swept the Wesmen in Winnipeg last year.  UFV sports an impressive 14-6 regular and post-season record going into the semi-final. They are ranked 9th in the CIS top ten poll. The UBC Thunderbirds and Saskatchewan Huskies are the other two Canada West semi-finalists.

The Canada West champion automatically receives a bid to the CIS women’s basketball national championship, in Calgary, Alberta the weekend of March 16-18.  The other three Canada West finalists all will participate in the CIS national regional tournaments in Saskatoon and Ottawa with an opportunity to earn a spot in the “Final Eight” tournament.