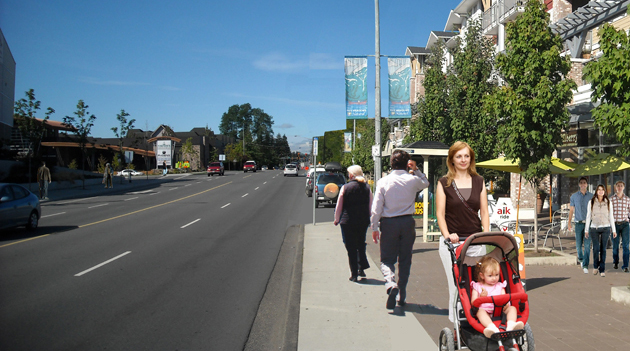 Craig Toews sees Abbotsford as a university town. And he’s looking forward to a future when the connection between town and gown is even closer.

To do that, UFV has two major strategies: create a new centre of learning right in the heart of Abbotsford’s civic core, and encourage the development of a university district in the area surrounding the Abbotsford campus on King Road.

While many would agree that UFV’s Abbotsford campus has a beautiful setting with spectacular views of Mt. Baker, it’s not close to the urban amenities that can be found nearby many other universities.

The first strategy is already in motion. UFV has leased the bottom floor of the Clearbrook library building in Abbotsford’s civic square and will be creating a vibrant new learning centre close to City Hall, The Reach gallery, Abbotsford police headquarters, and shopping and restaurants.

“This is a much better location for us,” Toews says. “It’s on transit routes and within five minutes walking distance of all those civic facilities and many services and amenities. It will give us a much higher profile for the programs that will be based there.  And we see a lot of opportunity for interaction between our academic departments and all of our new neighbours in the form of classes, workshops, and conferences. Our, geography, business, history, library tech, art and criminal justice programs will all benefit from having a space close by to the gallery, the library, the police station, and City Hall.

“It’s also going to be a much nicer space than our former leased facilities. It’s adjacent to the community garden, there will be lots of natural light, and we’re opening up spaces for students to study and just hang out.”

Across town at the main Abbotsford campus, the view is more long-term. UFV has been working with the City of Abbotsford on a vision for a university district surrounding the campus. 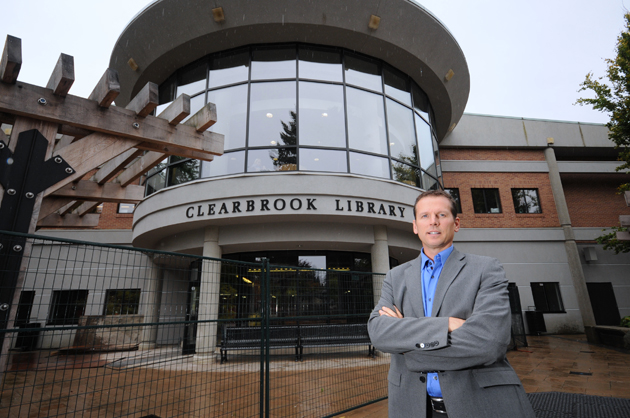 When the campus on King Road was built in 1983, it was plunked down in a gorgeous setting surrounded by farmland to the east and south and industrial land to the north.

Since then there has been in-fill development of suburban housing, and mini-malls, but for the first few decades nothing that comes close to resembling the vibrant and funky university districts that surround many institutes of higher learning. The addition of the Abbotsford Entertainment and Sports Centre right next door along with The Phoenix restaurant and pub adjacent to that is the start of what is hoped will become a true university district over the next few decades.

“What we want to see is an area where people can live, eat, shop, and use a variety of services within walking distance of our campus,” Toews says, noting that the new UFV Chilliwack campus at the Canada Education Park will be located in an instant university district because of the well-planned new community of Garrison Crossing being right next door with its mixed housing, recreational facilities, and shopping and restaurants.

“If the city were to lay down a blank canvas in terms of rezoning the surrounding area in a way that supports this type of neighbourhood, then we’re going to attract developers who will provide our campus population with affordable housing, and mixed use amenities and services right off campus. That’s the first win. The university would then be able to focus our limited capital resources on building more academic and cultural facilities rather than more residences. That’s the second win. And the developers and businesses that move in nearby will have a huge local market for their products and services. That’s the third win.”

Imagine the current King Road as a “high-street” style concept, with street-front shops and eateries and residential above, and wide promenade strolling sidewalks.  People could live across from where they worked, and pop off campus for a quick lunch or shopping trip. And the neighbours of the university could stroll on campus and take in the cultural and athletic events offered by UFV and the AESC.

Toews notes that Abbotsford has industrial land elsewhere in the city where current industrial activity near the campus could move to, and says that developing the adjacent lands as a university district would help “bring the community to the university.”

The city has had several consultation sessions with residents and businesses, and a group of senior UFV geography students took on a project in which they hosted a one-day ‘charette’ consultation session that attracted 300 participants in the UFV student pub.

People were invited to doodle, submit ideas, prioritize what they wanted near campus, and post items on a map. One of the most frequent student demands was for affordable off-campus housing.

“Conducting the charette was a great and rewarding challenge,” notes Varga. “It was a real-life project that will have a great and lasting impact on our entire community and enhance both the university and the Fraser Valley. It was an exciting taking what we know from theory and put it into practice.”

Toews notes that the u-district concept is not a hard-and-fast plan, but rather a vision for a new urban anchor that will support UFV and the local community.

“It’s a way for the city and the university to work together to present an opportunity to the community. The city would do the zoning. Then developers would then come in and identify what would be profitable for them to build. Entrepreneurs would decide what would work in terms of local businesses, and the public would vote by buying in, moving in, and patronizing businesses.”

Toews gives credit to the City of Abbotsford for being open to the idea of working together to design and promote a university district concept.

It may be decades in the making, but Toews is optimistic that there will come a time when Abbotsford can live up to the “university town” label.

A living laboratory: Food expert Dr. Lenore Newman will have plenty to study in the Fraser Valley
Rocky road: Getting university-college status for Fraser Valley College was no easy task