Golf tournaments and fundraising: the two go hand in hand. So when UFV golf coach Chris Bertram was looking for a way to boost funding for the UFV Cascades golf team, going the golf tourney route was an easy decision.

He even had the framework for a successful event in place. Former PGA player Ray Stewart lives in Abbotsford, and had run pro-am golf tournaments for other causes before. And since his son Brett Stewart had played for the UFV Cascades for 5 seasons, Ray was inclined to support his local university team and make UFV the beneficiary of his tournament.  “I know how hard Chris has worked to grow the golf program at UFV, and the success they have been able to achieve on a relative shoe-string is amazing,“ says Stewart.  “Seeing firsthand the positive effect the program has had on my own son, the decision to get involved in helping the team was a no-brainer.”

But this is no ordinary golf tournament. Ray was able to use his many connections in the golf community to bring the pros to Abbotsford for the tournament, matching 22 pros into foursomes with 66 amateurs. 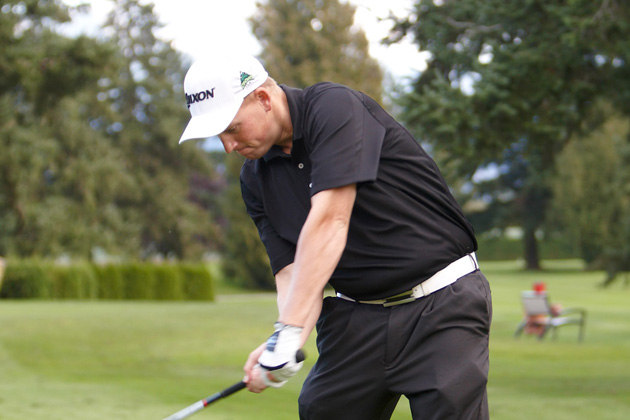 “The pros play the tournament for money, and the amateurs play for prizes, and for the thrill of playing with the pros,” explains Bertram. “It all adds up to a really fun day with great competition.  A real win-win for everyone involved.”

Abbotsford is a bit of golf hotbed, especially the Ledgeview golf course, which has recently produced talent such as James Lepp, Nick Taylor, and the current Canadian it-player, Adam Hadwin. The very best golfers are typically recruited by U.S. universities before launching their pro careers.

UFV’s Bertram wants to ensure that those who don’t leave for the States have a place to play university-level golf at home.

“We want to build a competitive program so that those that don’t get U.S. Division I scholarships have a place to play and to continue to develop their skills right here at home,” he says.

The community really gets behind the tournament. Local and out-of-town companies sponsor teams, and the pros often bring along amateurs within their circles. The title sponsor for the tournament was Bowers Medical of Kelowna, and the presenting sponsor was Cleveland Golf/Srixon Canada. Pros playing this year included Ray Stewart, Adam Hadwin (who was the defending champion from the 2010 event), and UFV Alum Clark MacPherson, who went on to take home the trophy this year.

This year the tournament generated nearly $30,000 in revenues, which allowed the team to enter some high-profile tournaments in the U.S. in addition to their four-tournament PACWest regular season.  A silver medal at the PACWest provincial championship earned them a berth to the nationals in PEI, where the team finished third in Canada, and landed on the national podium for the fourth time in the past five seasons.

“Without question, our program would not be where it is today without the support of the Fraser Valley business and golf community,” added Bertram.  “We are extremely grateful to all of those who continue to support the golf team and UFV athletics.” “Athletics at the university level are not an inexpensive endeavour, especially if you want your teams to do well,” notes UFV interim director of development Christiane Hodson. “We are happy to see the Abbotsford community recognizing the financial challenges faced by our golf team and stepping up to support UFV. We’ll be looking to our community for sponsorship support and players for the May 2012 tournament. Contact the Development Office for more information.”