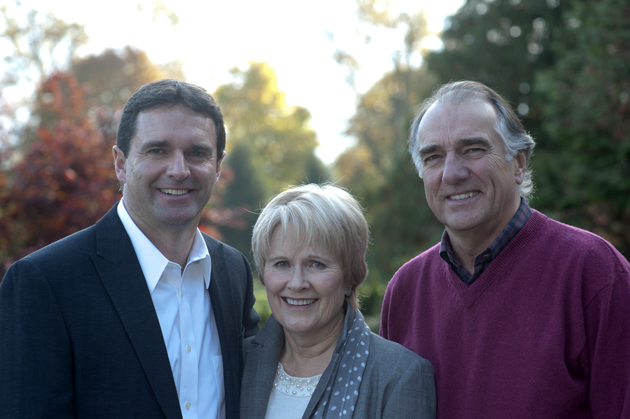 He grew up in with Fraser Valley College, moving to Chilliwack from Calgary as an 11-year-old in 1975 when his father Dick was hired to be the first Dean of Instruction.

“Dad came out first, and then at spring break the rest of us joined him. I remember driving from Hope and emerging into a beautiful green valley which was quite a pleasant change coming from the winter weather in Calgary. We quickly made friends as the whole community embraced and welcomed us right away.”

Scott’s parents, Dick and Barbara Bate, both had long careers with what’s now known as UFV.

Dick spent a quarter of a century in administration at Fraser Valley College and UCFV, seeing it grow during his time from a brand new ‘college without walls’ to a well-established, multi-campus, degree-granting institution. He played an instrumental role in most of the first faculty hiring, and the development of many programs, all of which continue to be offered at UFV. His legacy includes the ‘laddering concept,’ in which students can ladder their certificate or diploma into a degree program.

Dick played a planning role in every phase of UFV’s early history, from the first decisions about which university transfer courses to offer and which diplomas and certificated to develop, to lobbying the provincial government for funding for various programs, to the development of ‘applied’ bachelor’s degrees.

“When we became a university college in 1991, I saw a great opportunity for the community, partly driven by the sense that there were a number of strong two-year programs to build on,” Dick recalls. “It was a chance to address the dilemma often faced by graduates of two-year programs in that if they wanted a degree, they would generally have to start from scratch with little or no transfer credit for their diploma courses. I saw many excellent students unable to continue to degree-level studies because of this obstacle.”

Dick’s responsibilities changed several times over the years at his portfolio shifted. He was Dean of Applied Programs and Vice President at the time of his retirement and served as Acting President for several periods over the years.

Barbara taught in the Adult Basic Education program (also known as College and Career Prep and now Upgrading and University Prep). For several years she also had a special assignment as a literacy coordinator. In that role, she helped lay the foundation for several community literacy projects that remain in place today, including the Volunteer Tutor program, Read to Me (which pairs volunteer readers with kindergarten children), and Families in Motion, which provides literacy-related educational programming to preschoolers and their parents.

Barbara was seconded part-time for three years to the Ministry of Advanced Education to coordinate the development of province-wide literacy projects and materials. Her legacy includes pioneering the family literacy movement in B.C.

When Dick retired in 2000, UFV created a Dick Bate Endowment Scholarship, which annually awarded $500 to a student who has taken advantage of UFV’s laddering options.

The majority of the endowment for the scholarship was established at the time of Dick’s retirement. Friends, colleagues, family members, and the Bates themselves all donated to the original endowment fund. Recently, Scott looked at the amount the endowment is able to provide every year and decided he would like to see the scholarship increased to at least $1,000. He then called the Development Office and offered to donate $15,000 to increase the scholarship.

Working with the Bate family, the Development Office is now renaming the scholarship the Dick and Barbara Bate Scholarship to recognize Barbara’s contribution to the development of UFV along with Dick’s.

Working together with the Bate family, the Development office is now renaming the scholarship the Dick and Barbara Bate Scholarship to recognize Barbara’s contribution to the development of UFV along with Dick’s.

The award will continue to go to a student who has laddered their studies at UFV, whether it’s starting in a university-prep type program, and going on to complete a certificate and/or diploma, or someone who started with a diploma program and who has been accepted into a degree program (or, ideally, all of the above).

“We are delighted to see someone who has grown up with our university acknowledge that it’s time for his generation to play a role in supporting us philanthropically,” says UFV interim director of development Christiane Hodson. “As our alumni move ahead in their careers and settle into financially successful situations, we’ll be looking to them more and more to support their alma mater.”

Not only did Scott watch his parents as they helped build Fraser Valley College, he attended FVC for a few semesters in the 1980s, earning more than 30 credits while settling down into post-secondary studies as a 21-year-old after working for a few years and backpacking through the South Pacific.

And he’s been watching the university develop ever since he built a successful career out of his interest in business and automobiles. It’s a pursuit that has led to a senior executive position with the Mertin Auto Group. Scott recognizes that the value of education, particularly post-secondary education, is substantially that of learning how to learn and how to adapt to a constantly changing environment.

“They all worked hard to make sure I succeeded, and for that I am grateful. I was definitely not a model student to start out with, so they really helped me.”

After a year at FVC, Scott transferred to SFU where he earned a Bachelor of Arts in economics (as there were no degree programs at FVC in those days). He is thankful for his college and university studies and is now pleased to have the opportunity to give something back.