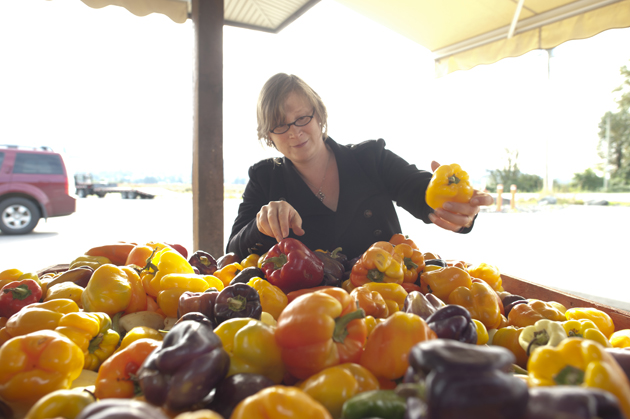 From her new office on the UFV Abbotsford campus, Dr. Lenore Newman could take a brief walk down the road and see raspberry, corn, and strawberry fields and dairy farms. In a five-minute drive, she could visit a number of farmers’ markets selling local produce. If she chose to, she could buy a new house or condo in one of many local housing developments or a heritage farmhouse on an acreage. Within 10 minutes, she could drive to the Fraser River or creeks where wild salmon spawn.

If she didn’t feel like buying local that day, she could be at Costco or Wal-Mart within minutes too. And at the end of the day, she could (and does) embark on a long, but do-able, reverse commute to the Commercial Drive area of Vancouver.

In short, she’s landed herself in the perfect living laboratory for a researcher into Canada’s food culture, food sustainability, and the competing pressures on our farmland and wilderness.

Newman was recently appointed Canada Research Chair in Food Security and Environment and joined the Geography department at UFV this past August.

Newman fills the second Canada Research Chair position at UFV. The first is held by Dr. Hugh Brody, a cultural anthropologist and filmmaker.

She comes to UFV from Royal Roads University in Victoria, where was an assistant professor in the School of Environment and Sustainability, and head of the Master of Environmental Management program.

Newman holds a PhD and a master’s degree, both in environmental studies, from York University, and a BSc (honours) in physics and astronomy from the University of British Columbia. She has travelled extensively and developed a strong interest in sustainability partly as a result of those travels.

As part of her appointment, Newman will be investigating Canada’s foodways, or how food defines Canadians and their culture, and how cuisine shapes identity. She will also be looking at environmental and social threats to food sustainability. The location of UFV in rural zone at the edge of a growing metropolis provides a perfect venue for her research, although her scope is also nationwide. 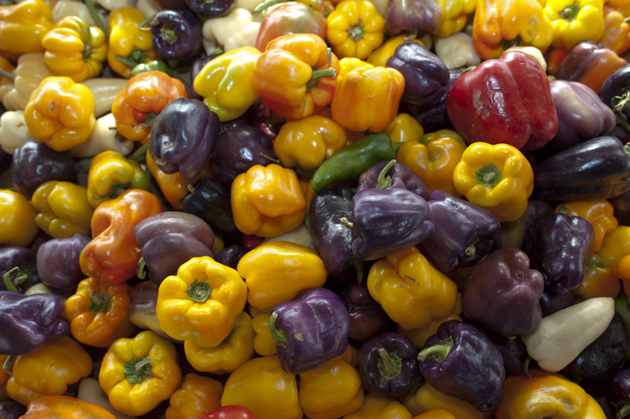 Newman will be crossing the country finding “foods of locality,” talking to food producers and chefs, and recording her research through film and still photography, along with other methods.

“The Fraser Valley is a fascinating region. It’s different from Vancouver and it’s changing rapidly. Abbotsford is one of those edge cities with typical post-modern development where you see farms, suburbs, and urban environments all intermingled. There are major tensions between farmers’ interests, encroaching development, and preserving the rivers that the salmon need to survive.”

Although we like to take pride in our local foods in the Fraser Valley and much of our economy depends on agriculture, Newman says that nothing is guaranteed unless steps are taken to preserve the farmland and wild habitat needed to produce food.

“Chilliwack is famous for corn, but the only way to preserve a local food source like that is if steps are taken to preserve the land. Vancouver is a world city with enormous growth pressures and it will fill this valley if it is allowed to. We do have the Agricultural Land Reserve but it’s quite leaky. We don’t want to see land leaving the ALR but there are incredible development pressures on it. Being situated right next to a major city on the Pacific Rim is both a blessing and a curse for agricultural communities.

“The provincial government is spending billions of dollars right now to bring the Fraser Valley into comfortable commuting range of Vancouver. Once the Gateway project is finished, it puts this region into that category and development pressures will increase even more.”

Newman says issues such as transportation, availability, and evolving attitudes about the value of local food all affect the health of our food system.

“Having local food available plays a huge role in the new emphasis on fresh, tasty food. Our berry industry benefits from the fact that it’s hard to transport berries long distances while keeping them fresh and appealing.”

When asked what comes to mind when thinking of foods that define B.C. cuisine, wild salmon, fresh wild crab and other seafood, and blackberries are her immediate response. A devoted foodie, Newman is definitely in the right line of work, and loves the tactile and sensual nature of her research and how it crosses over into hobby and pleasure for her. Who wouldn’t want to be tasked with researching farmers’ markets across Canada (as she did for an earlier project)?

But there is a more serious motivation behind her research focus as well.

She started her undergraduate career studying physics and astronomy out of sheer curiosity.

“Then I took a course in carbon chemistry and got really interested in how the earth’s environment works. Then I saw David Suzuki speak once and got all fired up about environmental issues. Later I travelled extensively through Russia, China, Mongolia, Europe, and Canada, and everywhere I went I saw fragmented ecosystems and environmental degradation. I decided that I wanted to put my education to work on environmental issues.

Her next step was master’s degree focusing on the social side of environmental science, and then a doctorate.

“My graduate work focused on complex systems theory, or how large numbers of people and institutions interact and evolve.”

She did some work with Dr. Thomas Homer-Dixon at the University of Toronto, “pushing the thinking forward on applying these theories on the ground and to the context of the environment.”

While doing post-doctoral research with Dr. Ann Dale, she looked at public food markets as an example of sustainability theories in action.

“I really got into studying food from a sustainability perspective because it is a good example of how we can act sustainably. People can’t change their house or their car overnight, but they can commit to eating a less energy-intense diet one day per week, for example eating a vegetarian dinner.”

Newman is also interested in how farming families and communities are coping with the changing nature of agriculture, development pressures, and other challenges. 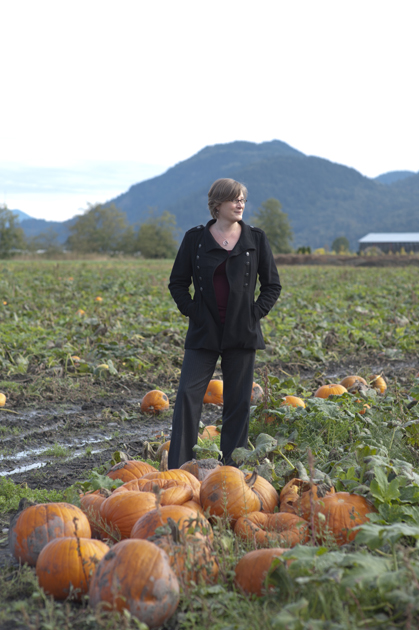 “Traditional agriculture extension programs are closing at universities across North America. In most farm families, either the next generation is not taking over, or they are choosing to take a business degree because that’s seen as more relevant.”

While investigating local foodways of the Fraser Valley, Newman will also be considering indigenous foodways, and the traditional and current importance of salmon and berries to the aboriginal population.

Although her studies and research have taken her across the country and she has travelled the world, Newman is a British Columbian at heart. She grew up in Roberts Creek on a Sunshine Coast and came from logging and fishing family.

An activist for LGBT rights, she views the university environment as a place where “people can speak to each other and debate social issues and communicate without ripping each other apart,” and she values the relative civility and tolerance of Canadian society.