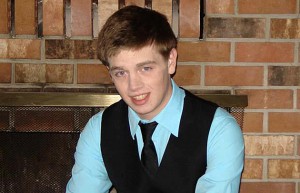 Travis Daleman is a UFV student running for the mayoral seat in Abbotsford.

This week, UFV’s CIVL Radio will be hosting an all-candidates’ debate featuring a UFV student running for the mayoral seat of Abbotsford.

Daleman is one of the youngest candidates to run in Canada, garnering him extra media attention during his campaign. The UFV student recently celebrated his 18th birthday, making him eligible to take part in the Nov 19 municipal election.

The all-candidates debate will be broadcast as a special edition on Friday, Nov 4 from 2–3pm, and then re-air on Monday, Nov 14 from 10–11am.

In both instances, the show can be heard by tuning in to 101.7 FM, or listening online at www.civl.ca.

“Given the incredibly positive response we received from the community after our all-candidates debate for the federal election, we’re glad to be able to once again provide an opportunity to connect the community with their candidates,” said Justin P. Goodrich, the host and producer of the weekly political and public affairs show.