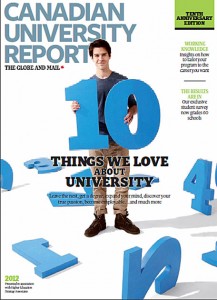 UFV among Canada’s best in Globe and Mail’s 2012 University Report.

Once again, UFV students have given their university first-class grades in several key categories.

The Globe and Mail’s 2012 Canadian University Report was released on October 25, and the University of the Fraser Valley earned A-level grades in class size, quality of teaching and learning, student-faculty interaction, and instructors’ teaching style.

“We are pleased to be recognized nationally for achieving what matters most to us – providing high quality, student-focused post-secondary education. Our growing reputation as one of Canada’s best undergraduate universities is a tribute to the talent and commitment of our faculty and staff,” said UFV president Mark Evered.

UFV, along with the University of Northern British Columbia, earned the most A-level grades of any public university of any size in BC.

UFV placed first in BC in the in categories of quality of teaching and learning, instructors’ teaching style, and academic counselling.

And UFV can count itself as among Canada’s best public universities, placing in the top 10 in terms of number of A-level grades out of more than 60 universities rated in this year’s survey.

The 2012 Globe and Mail Canadian University Report data is derived from an annual survey with around 100 questions sent to over 33,000 undergraduate university students spread among 60 universities in Canada.

This is the fifth straight year that UFV has ranked among the top in Canada and BC in this report.

Get Animated! A free screening of short films
Festival of Lights brightens up UFV Abbotsford campus