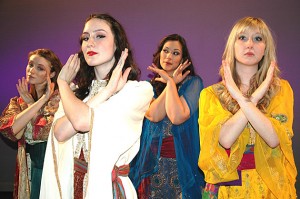 The UFV Theatre department has kicked off its 2011/12 season with an adaptation of The Arabian Nights by American playwright Mary Zimmerman.

Performed on the Chilliwack campus, this critically praised work re-examines the tale of Scheherazade.

Since discovering his queen’s infidelity — which she pays for with her life — cruel King  Shahryar has soured on all womankind, taking a virgin bride every night, then killing her at dawn to ensure he’ll never be betrayed again.

There’s no one left but clever Scheherazade.

Can her one thousand and one cliff-hanger stories prevent her husband, from murdering her?   This production promises to be feast for the senses, featuring colourful costumes, live music and exotic dances.

The Arabian Nights, which will be directed by Theatre department member Heather Robertson, features a talented cast of UFV Theatre students with each performer playing a variety of roles.

Set and costumes for The Arabian Nights are designed by former UFV Theatre student Jay Havens, who now works as a professional designer in the Vancouver theatre community. Lighting design is by Sandy Tait and stage manager is Gabriel Kirkley.

Live musical accompaniment for this production will be provided by Leanne Atley on violin and percussion and Bryce Bennett on keyboard and percussion.

The Arabian Nights opened on Friday, Nov. 11 at 7:30 p.m. in the theatre on the Chilliwack campus.

Tickets range from $9–$20. Season tickets are also still available, including the other two shows of the season Dead Man’s Cell Phone and As You Like It.