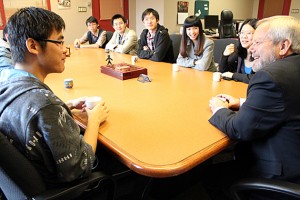 On Friday, Oct 21, eight Chinese students who arrived at UFV this fall joined UFV president Mark Evered for a cup of tea in his office.

“I wanted to reconnect with students I had met during my trip to China in May and find out how they were doing with their studies,” said Evered.

The students told Evered they are adjusting well, both to their academic programs and to campus life. Some shared their hopes of pursuing a Master’s degree at other Canadian universities after they complete their courses at UFV.

Five of the students come from the University of Shanghai for Science and Technology (USST).  UFV has transfer agreements with USST in the fields of computer studies, math, chemistry and physics.

The students who met with Evered currently study computer information systems and mathematics. One student is still upgrading his English in preparation to study chemistry.

The other three students come from the City Institute of Dalian University of Technology (CIDUT) as part of an agreement that enables students in their third year to complete their degree in computer information systems at UFV.

Two of the students reported that they are currently upgrading their English before starting their academic studies.

In the next few days, Evered and UFV faculty are scheduled to meet with representatives who will visit from USST and CIDUT to explore new avenues for partnership.

On Oct 31, Professor Lu Le, USST’s dean of the College of Foreign Languages, and colleague Gao Jun will meet Mike Ivanoff, director of UFV’s School of Business, and Maria Bos Chan, head of UFV’s ESL department, to discuss in greater depth the possibility of articulating courses to facilitate student transfer.

In addition, as of Nov 1, Dr. Huan Huo from USST will join UFV as an adjunct visiting faculty member for a year. Dr. Huo, who specializes in “uncertain” data processing, will share her expertise with UFV colleagues in the computer information systems department and help supervise three fourth-year CIS students from USST who will graduate this year.

During their visit, both delegations will have the opportunity to meet with the students who are already at UFV to socialize and get feedback.

One Response to International partnerships set the stage for student success