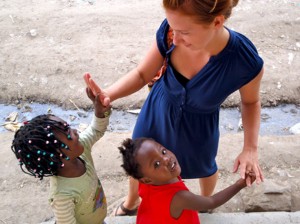 UFV alumna Victoria Harris, who earned a BA in Sociology/Anthropology with an extended minor in Theatre in 2010, has a message for students: “Find something you love to do, and then surround yourself with others who can help you get to where you want to be.”

Following her own advice, she is currently working in Africa.

In the past, Harris has worked in Uganda on a placement with GIVE International.

This time, Harris is working in the Mukuru slums in Nairobi, Kenya.

It has her working at a small Kenyan Community Based Organization called Make A Better World Kenya (MABWOK). The group does everything from early childhood education to adult literacy, to computer training and reproductive health clubs in local schools.

Here’s her experience so far:

My introduction to Kenya was not unexpected — the city of Nairobi was just as insanely busy, smog filled, congested and expensive as everyone had warned me about. Mukuru slum was just as poor and underdeveloped.

In addition, Make A Better World Kenya (MABWOK) was just as short on resources, despite their big heart and vision.

I’ve worked in east Africa before, and I get how to communicate with locals and how to barter my way into a decent price for a taxi. I know that everything moves 1,000 times slower (or just differently) than I am used to in Canada.

I have never been so extremely frustrated with a place I’ve been living. I’ve never ended up in tears after sitting in a sweaty congested bus stuck in a traffic jam for three hours.

Amongst the hundreds of NGOs, CBOs, governmental sectors, private sector foundations, societies, social enterprises, and non-profits that exist simultaneously in Nairobi, MABWOK formed as a group of street kids with originally no support except from the community of Mukuru and its inhabitants. It formed with a vision to change the lives of its peers, the youth, and children, for the better.

During the past 10 years, the group has seen growth and struggle with finances and commitment of street youth, struggled with resources for the children, struggled to pay its teachers and to keep spirits high.

However, it’s the group’s positive attitude that I’m encouraged by, and in turn have discovered my main duty here is to encourage and support it as it continues to fight for change in the slums.

In this case, I am helping the group focus its efforts on becoming a self-sustained organization — one that does not need to be constantly chasing donor funding and applying for grants.

If sustainable on its own, MABWOK can continue to grow its projects and reach more vulnerable slum residents and help them improve their lives.

I’m currently raising funds to purchase some new computers and a new photocopier for the organization to be able to run a more profitable and much needed business center/internet café in the slums.

I’m also writing various funding proposals and developing a slum upgrading program which will employ youth in construction of an alternative building technology, interlocking stabilized soil blocks (ISSB), which will form housing cooperatives within the community and encourage tenants and landlords to upgrade their 10 by 10 tin houses into safe and secure housing.

I’ve got two more months to go on an eight month placement, and will be back in Abbotsford mid-December.

My advice to those at UFV is to take every opportunity to get involved in the career field that interests you. Get to know professors who work and have worked in that field and volunteer for as many events as possible.

My highlights from being at UFV are all based around the fact that it is a small school and you can get some very directed and helpful advice for your future career.

Find something you love to do, and then surround yourself with others who can help you get to where you want to be. UFV is an excellent place for that.

One Response to Get involved in what interests you: advice from an alumna