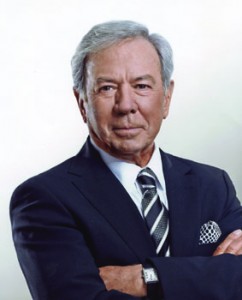 On Wednesday night, at about 8:45 p.m., after co-anchoring CBC News: Vancouver, Tony Parsons took a few minutes to chat about his life in the news.

Preparing for his 10 p.m. newscast for CHEK-TV in Victoria, he was in a good mood, despite the Canucks’ loss.

He now films both shows from Vancouver instead of flying between the studios – a novelty that wore off after six months.

While Parsons, 72, has carved himself a niche in Canadian broadcasting during his 50 year career, he had a different goal as a teenager.

Admittedly, he wanted to become a lawyer. However, he was redirected to broadcasting when he landed his first job at 17 years old.

Starting off at a country station in Ontario, as what he calls “the worst DJ to ever come down the pipe,” he soon transitioned to street reporting, covering police and city hall.

Since then, he’s seen some changes in the industry. One such change is the equipment used by reporters.

He remembers using film and clunky video cameras to record in the field. They’d often return to the studio only to find scratches on the film, or that they’d lost their audio.

While the technology has changed, Parsons believes the basics of journalism have remained the same.

“I think, fundamentally, it’s the same thing. (We’re) still gathering stories to tell people,” he says.  “We still get the story and deliver it to the viewers and readers.”

However, he acknowledges the way news is gathered has progressed, as everything is becoming instantaneous. While he believes it serves the industry well, he worries about it becoming too quick, leading to oversights and mistakes.

For those starting out in the world of journalism, Parsons believes a few qualities are needed.

“I think you have to have curiosity. And perseverance would certainly help.”

An understanding of global politics always comes in handy, he adds.

In addition, having patience to lay a foundation and work your way up the ladder is important.

“Young people frequently ask ‘What should I do? Where do I go?’ I say, find the smallest place with a radio station or TV station, knock on their door and don’t leave until you get a job.”

Then, learn everything you can about the operation and technology – “you’ll never go wrong,” he says.

“If you’re offered an entry level job, take it, nurture it and make it your own. Then no one else can take it away.”

Parsons has followed his own advice.

He chose not to “quietly walk away” after his contract expired at Global TV.

Instead, in 2010, he followed a new opportunity to continue forward in his career, balancing two jobs.

“I was very fortunate. I just don’t think when a contract ends or retirement is flexed upon you, you have to say that’s it… If you have a valuable service then you can extend your career,” says Parsons. “And that’s something that can be applied to any job.”

The longtime Canadian broadcaster is visiting UFV Chilliwack today (Friday) to talk about his life in the news and answer questions from the audience.

While it is open to the public, it requires an RSVP to cera@ufv.ca.

Playwright Tomson Highway to visit UFV Oct 23 and 24
UFV in the news: 17-year-old running for mayor in Abbotsford

One Response to An interview with Tony Parsons: A Life in News