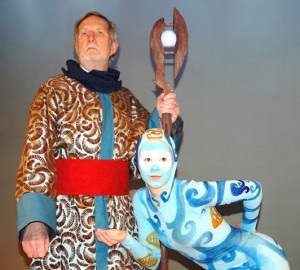 A scene from The Tempest, last year’s Shakespeare production

The University of the Fraser Valley Theatre department has announced the 2011/12 theatre season with three great shows that are sure to entertain and educate theatre lovers at prices they can’t afford to ignore.  After all, live theatre is… the ultimate in 3D entertainment!

The first main-stage production of the season is a spell-binding adaptation of Arabian Nights. This critically praised work re-examines the fascinating tale of Scheherazade:  Since discovering his queen’s infidelity — which she pays for with her life — cruel King Shahryar has soured on all womankind, taking a virgin bride every night, then killing her at dawn to ensure he’ll never be betrayed again. There’s no one left but clever Scheherazade. Can her one thousand and one cliff-hanger stories prevent her husband, from murdering her?  The final scene brings the audience back to a modern day Baghdad with the wail of air raid sirens threatening the rich culture and history that are embodied by these tales.  Warning: PG.13

The second production of the season is Dead Man’s Cell Phone, by Pulitzer Prize finalist Sarah Ruhl. An incessantly ringing cell phone in a quiet café, a stranger at the next table who has had enough, and a dead man — with a lot of loose ends. So begins this quirky black comedy. Dead Man’s Cell Phone is a work that examines how we memorialize the dead, and how that remembering changes us. It is the odyssey of a woman forced to confront her own assumptions about morality, redemption and the need to connect in a technologically obsessed world. It’s fun too!

This year’s Shakespeare production features the welcome return to our stage of As You Like It, one of The Bard’s most popular romantic comedies.  As You Like It delighted audiences during both our 1983 and 1998 presentations and we’re sure it will do so again. Rosalind, one of Shakespeare’s most beloved female characters, is forced to flee with her cousin Celia and Court Jester, Touchstone, to the Forest of Arden, to escape the wrath of her tyrannical uncle. To survive undetected she must disguise herself as a man. When she meets  Orlando, the object of her desire, there, the stage is set for an intriguing and entertaining examination of true meaning of romantic love.  The play is filled with a cornucopia of comic characters and situations, with a happy ending and a wrestling match to boot. Don’t miss it!

All shows are in the  Chilliwack campus theatre.