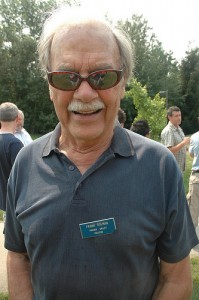 Frank was one of the four founding administrative employees of Fraser Valley College in 1974. The others were Eric Woodroff, Betty Urquhart, and Roy Craven, all of whom have also passed away. Bill Sharp was another founding employee, albeit a temporary one. He was seconded from the Abbotsford School District as the first bursar.

As part of the ongoing history of UFV project, Anne Russell of the Marcom team interviewed Frank in 2010. Here is an excerpt of the story written from that interview:

Frank Dolman was director of adult education for the Mission School District in 1974. He had moved out from the city a year earlier, having heard a tip from his friend Bill Day (president of Douglas College) that a college was in the works for the Fraser Valley.

Even before the college was officially announced in April, 1974, Frank and others were working for the future college on an ad hoc basis, helping with a publicity campaign to convince community members to vote “yes” in a plebiscite held to determine whether taxpayers were willing to fund a college.

“So right from the start, one of our first tasks was public relations on behalf of the idea of a college,” Frank recalled. “We talked to Rotary, to women’s clubs, to the media, and to anyone who would listen.”

Once the plebiscite passed with an 89 percent in favour vote and Education Minister Eileen Dailly proclaimed the college into existence on April 4, 1974, the huge challenge of launching an “instant college” by September began.

The original four were assigned duties to help ensure a September launch.

Betty Urquhart took on organizing, developing, and staffing a complement of university transfer courses. Her job was made somewhat easier through the cooperation of the already established Douglas College, which allowed the new FVC to use its curriculum in the first year, and recommended many of the faculty who were hired on an interim basis to teach in a night school format. Some of these initial faculty members, such as Dave Wyatt, Peter Slade, Astrid Stec, and Paul Herman (who arrived midway through in the first semester to replace someone else) stayed for decades.

Roy Craven, although he did not stay with the college long, was instrumental in the development of Student Services, the admissions and registration system, and the first college calendar, as well as overseeing the Abbotsford general interest program.

In June, Beryl Frederickson was hired to open the Hope office, and Val Edmundson for the Agassiz office.

Eric Woodroff served as a general administrator along with bursar Bill Sharp, filling in the gap until the first principal, Dr. Larry Blake, arrived in October.

“We were under tremendous pressure to open the college to students in September of 1974, and there were times when we wondered if we would ever achieve this end,” recalled Eric in a 1983 booklet entitled The Founding of Fraser Valley College that he compiled and wrote.  “However, in spite of all the difficulties, the college did begin its programs at the beginning of September, with a full year of university-transfer courses running, and with career, vocational, and/or general interest courses operating in all five regions (Abbotsford, Chilliwack, Mission, Agassiz, and Hope). It was quite an accomplishment. As I reflect on those hectic times and the beginning of Fraser Valley College, I am filled with a deep pride for what was achieved by a few people. The college is now a vibrant institution of post-secondary learning.”

As one way of generating programming, Fraser Valley College took over continuing education (then also known as ‘night school’) courses in the region, which had previously been the responsibility of individual school districts.

He remembers the frenzied build up to the college launch in 1974, and the first few years afterwards, as busy times.

“We had to launch programming, find space to offer it in since we were the college without walls, and hire instructors,” he recalls. “There were a lot of 18-hour days. We practised what I like to call the ‘art of the possible’. If it could be done, we strove to do it.”

While wearing the career/vocational hat, Frank launched programs such as farrier training and welding. For farrier training (horseshoeing) the students went where the horses were. Bob Marshall, whom Frank hired from England to teach the program, would bring his students to host farms and stables. Eventually this led to the program moving into Kwantlen College’s jurisdiction since so much of the equine industry is based in Langley.

As for welding, Frank knew there was demand for a program, but the new college had no facilities.

“We heard that the Matsqui prison had a shop, so we struck a deal. After they closed up for the day, we’d bring in non-inmate students at 5 pm. So some of our students got their college experience in prison.”

Walter Bissky was the prison welding instructor, and eventually moved over to become one of FVC’s first trades instructors.

Then there was the challenge of acquiring equipment for programs. Frank shared this story in the 1983 booklet The Founding of Fraser Valley College:

“By late summer 1974 we had set up an Office Careers program and had ordered typewriters from IBM. We had got notice that the typewriters were on the way, but two weeks before the classes were due to start, no typewriters. Finally, on a Friday morning, with the class due to start on Monday, I went to Bob Dyke, who as bursar was also acting as purchasing agent, and explained the problem.  Bob said, ‘Don’t worry, I’ll get typewriters.’ So he jumped into his station wagon and drove off to Vancouver. Within a couple of hours he arrived back with 30 typewriters. However, on Monday morning we discovered how he got them. He had picked up typewriters that were in for repair. Very few of them worked, but they sufficed until the order arrived. Sheila Elliott and Betty Mitchell were the newly hired instructors for the program.”

“As the director of the western region I was very independent. I had a mandate to meet community needs and was very happy doing so, and I also brought in a profit of $150,000 to $200,000 a year.”

In those days continuing education planners were open to almost any course that sounded like it might attract students or serve a community need.

“We would put on almost everything. People were always dropping in and offering to teach courses. And at one point we had 20,000 registrations a year. A reasonably full class would pay for itself so there wasn’t too much risk involved.”

He was open to requests from industry too.

“One time I was golfing in Chilliwack and a fellow came up to me and said his company would love to have a course in hydraulics and fluidics put on in Boston Bar, that it was too expensive to send millwrights to the city to take it. I told him that if he could find me a dozen students he’d put it on. So he went to the various other mills, including some from Lillooet, and recruited. So we ended up with a two-day-a-week course for them close to home for a month.

“Another time a fellow from a German engineering firm that had set up on north McCallum Road came to see me. They were making trusses for the new Skytrain and he wanted a course in blueprint reading put on for the all-Portuguese carpentry crew.  I told him we couldn’t do it in Portuguese but that I could find him an instructor if he could arrange an interpreter. We had to start the course right at 5 pm because these men were staying far from home, and their primary occupation after work was to hit the bars, so we had to catch them before they started drinking.”

Perhaps the most unique legacy Frank created was a Fraser Valley symphony orchestra.

“I knew there was a lot of musical interest and talent in the Fraser Valley, so I took some money out of my part-time vocational fund, secured some space in a high school music room, and hired the head of music from Trinity Western to conduct. We had 60 people come out the first meeting, and eventually were producing three concerts a year. I liked to say that we were the only community college with its own symphony.”

Frank recalls that in the early years, before the Marshall Road and eventually King Road campuses were established, the college could be a hard sell in the western end of the valley.

“In a lot of folks’ minds the college didn’t exist because we had no buildings of our own. People would say, ‘where are you?’ and I would say ‘we’re all over the place.’ The community was not impressed, unless a person had taken courses from us. Then they knew we were up to something good.”

Frank was born in Nakusp and spent his earlier years logging (he started out at age 15 and was one of the last of the manual cross cut saw fallers) a sawmill manager at age 21 as well as a bona-fide cowboy. After university, Frank worked most of his life in the field of education, first as a teacher and then in the field of Continuing and Adult Education; in 1973 being one of the first permanent employees of the then soon-to-be-formed Fraser Valley College, and then, one of a group who became leaders in the establishment of what is now the University of the Fraser Valley.

Frank was a very enthusiastic member of the Hole in the Wall club, and many other organizations. He was a participant of the “Dirty Dozen” golf group (mostly Hole in the Wall members), which golfed for years at the Chilliwack Golf & Country Club.

Frank was also very musical: he was a Member of the Vancouver Welsh Men’s Choir for more than 15 years, and had an over 20-year involvement with the Fraser Valley Musical Theatre Guild.

UFV in the news: Enrollment up at UFV
UFV Season of Theatre announced

2 Responses to Founding UFV employee Frank Dolman has passed away