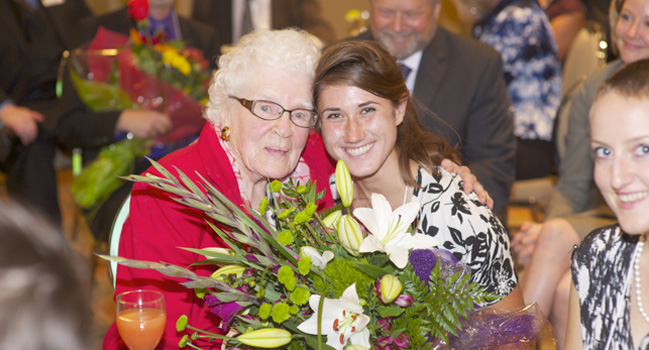 If you were an eavesdropper at the University of the Fraser Valley Changing Lives awards ceremony on Sept 20, you would have heard those words repeated over and over again.

This year, the UFV development office, which coordinates all fundraising initiatives at UFV, tried a new cocktail party-style format for the event, bringing donors and recipients together in an informal setting amidst hors d’oeuvres and punch at the Ramada Inn.

Each award recipient was given a rose (donated by UFV Chancellor Brian Minter) to present to their donor as a gesture of thanks.  Large screens displayed a rotating slide show profiling donors and recipients.

Post-secondary education is not an inexpensive endeavour. Tuition, books, and living expenses all add up. For many students, a scholarship or bursary is a welcome and necessary lifeline that helps them to finance their education.

At UFV, hundreds of scholarships and awards (primarily based on merit), and bursaries (primarily based on financial need) are provided each year by a wide variety of donors.  Approximately $300,000 was distributed at the awards ceremony; UFV gives out nearly $750,000 in student support annually.

“We value all of our donors at UFV and are very pleased to be able to bring donors and recipients together at our ceremony so that they get a chance to meet. It makes the experience of supporting our students much more real when they meet the recipient and hear personal stories of how their donations make a difference,” said Christiane Hodson, UFV’s interim director of development.

UFV president Mark Evered urged donors not to underestimate their power to change lives through their gift. He shared his own story, of being a young student with a wife and a new baby, and the first person in his family to attend university.

“We were struggling financially, and I seriously doubted whether I could continue in school. It was a definite low point. And then a letter arrived saying I had received a bursary named in memory of Eric Schlicting. It had been established by his family and friends to commemorate Eric, who had been killed in a car accident a few years before. I stand before you as an example of someone who probably wouldn’t be here in the position I hold today if it hadn’t been for that generosity. I never met Eric, but over 40 years later, his name is as familiar to me as my family’s. He was clearly one of the most influential people in my life.”

UFV alumnus and lawyer Shirzad Ahmed of Calgary, who took two years of university transfer courses at UFV in the early 1990s, was honoured at the ceremony for his humanitarian work with refugees from around the globe.

“The best thing about being here tonight is being here with what I consider my family in this community,” noted Ahmed, who counts current UFV provost and vice president academic Eric Davis among his friends and mentors. “The university has changed quite a bit with residences, a gym, and a pub, but it still feels like home.”

“Changing Lives is a fitting title for tonight’s ceremony, because that is truly what you as donors have done us,”  she said. “Many of us know what it is like to juggle our studies with one or two jobs, to stress about rent and meals, and to cherish the nights we sheepishly return to our parents’ houses to do laundry. Because of the contributions from individuals and corporations here, we have the opportunity to focus on our goals, instead of our financial problems. Gifts like yours have allowed me to experience so much more of the rich UFV community, from competitive rowing and intramurals, to sustainability conferences and math club talks. For that, I am greatly indebted to you.

“The personal growth I have undergone at UFV completely amazes me. I can’t help thinking back to the awards ceremony in my first year. I remember listening to the student speaker and thinking ‘Wow, she’s gutsy. I’m glad that’s not me up there.’ And now, here I am. Something really special happens at this university. It inspires confidence, ambition and a drive to better the community we live in.”

Jean Scott of Chilliwack, who received an honorary doctorate from UFV in 2002 and who supports a scholarship in her name through relentless fundraising amongst her friends and acquaintances, shared some wisdom from her 99-and-a-half years of living. The poverty of the 1930s depression prevented Scott from pursuing her own dreams of university.

To illustrate a point about the wonders of progress, Scott brought an old-fashioned washboard up on stage, and talked about the many hours of labour that people, mostly women, used to have to devote to washing the family’s clothes with minimal technology.

“Then someone thought of a way that you could push a button and your clothes would get clean. Once things started moving to save us labour it was a wonderful thing to see. So if you want to make the world better, don’t be to proud to think of all the small innovations that could make life easier. It makes a big difference,” said Scott.