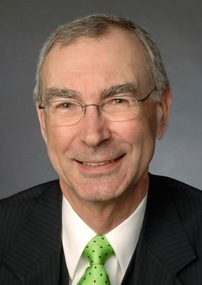 Chilliwack lawyer Larry Stinson is the new chair of the UFV Board of Governors, succeeding Rod Thomson of Abbotsford, whose term expires this summer. Henry Jansen will serve as first vice chair and Bonnie McGhie will be second vice chair.

UFV’s Board of Governors is comprised of appointed local citizens and elected faculty, staff, and students. It has a mandate to oversee the management, administration, and control of the property, revenue, business, and affairs of the university.

Stinson is a corporate lawyer and partner with Baker Newby LLP, a law firm with offices in Chilliwack and Abbotsford. He obtained a BA from the University of Alberta and a JD degree from the University of British Columbia, and has been practising law since 1969. He and his wife Karola have lived on a hobby farm in the Greendale area of Chilliwack since the mid-1970s.

Stinson has been connected to UFV in a myriad of ways since its early days as Fraser Valley College, when he periodically taught continuing education courses on a variety of legal topics and also occasionally served as legal counsel. When the university was building its new theatre on the Chilliwack campus in the mid-1990s, Stinson’s Rotary club was actively involved in fundraising for the project. He then became a member and eventually the chair of the UFV (then known as UCFV) Foundation Board, which had a mandate of overseeing fundraising efforts at the university and acting as stewards of those funds. He helped set many of the policies surrounding fundraising at UFV, which is now overseen by the university development office.

And all along the way he has had a close connection to UFV students, welcoming many to his country home for special events, as the spouse of former longtime international education director Karola Stinson.

Stinson joined the UFV Board of Governors in 2007, and most recently served as vice chair.

“I see my role of board chair largely as guiding the activities of the Board and providing support to the president in fulfilling the strategic goals of the university,” notes Stinson. “I’ll be very happy to be working with President Mark Evered in that capacity.”

Some of the big issues and activities that Stinson sees having input into over the next two years include UFV’s move of the Chilliwack campus to the new facilities under construction at the Canada Education Park, the sale of the current Yale Road Chilliwack campus, the annual university budget process (always challenging in tight economic times), and balancing growing demand for university seats against limited public funding. He’s also concerned that the proportion of high school graduates who continue to post-secondary education is lower in the UFV region than in others, and wants to encourage more participation from the aboriginal population.

He further notes the board’s responsibility in providing oversight for the university on policy issues and to represent community interests.

“A lot of our policies were developed some time ago over the course of the evolution from college to university-college, to university, and many of them need updating. We as a board have been working on that, led by board second vice chair Bonnie McGhie. We are reviewing the role of the board now that we’re in a bicameral governance structure alongside the new university senate, which has specific powers under our governing legislation.”

As Stinson enters his term as UFV board chair, he acknowledges the hard work of his predecessor.

“I would like to acknowledge the contribution of outgoing chair Rod Thomson and hope I can continue the excellent leadership demonstrated by him as board chair.”

UFV president Mark Evered also thanked Thomson for his many efforts on behalf of the university during his time as board chair.

Stinson recognizes and appreciates the strong community spirit found in the Fraser Valley.

“There’s a very strong sense of community here, and it can express itself pretty powerfully when it needs to,” he says, citing the examples of when the community lobbied for a college, a university college, and a university in the Fraser Valley over the decades.

His community involvement began with the Chilliwack and District Agricultural Society, where he served as a director and member of the executive for a number of years. He acted as a director for the 2003 BC Seniors Games and has been voluntary general counsel to Chilliwack Community Services continuously since 1976. An active Rotarian, Stinson served as president of the Chilliwack Rotary Club in 2001/02 and as governor of Rotary District 5050 in 2008/09. Prior to his appointment to the UFV Board of Governors, Stinson was a director and board chair of the UCFV Foundation.