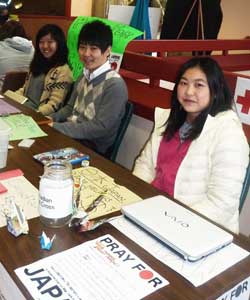 In the wake of the devastating earthquake and tsunami that hit Japan on March 11, 2011, UFV Japanese students joined together to pray and raise money for their homeland. Students have set up tables to collect donations at Tim Horton’s and Alumni Hall on campus, as well as at selected outlets throughout Abbotsford.

In addition, students organized a hotdog lunch at Baker House on Thursday, March 17 and a curry meal and origami earring sales at U-House on March 18, with all proceeds going directly to the relief effort.

“The response from our Japanese students has been amazing,” says Michelle Rickaby, UFV International’s student program coordinator. “They mobilized right away to show support and raise money. All we did was help them get in touch with the Red Cross to formalize their collection efforts. All the rest was student-led.”

“At first, I just suggested we could do some fundraising on campus,” says first-year ESL student, Ayaka Hatakeyama, who is leading the team of volunteers. “But now, it is growing much bigger. Other international students have also joined us to help, including Chinese, Vietnamese, and Indian students. And we’ve also received support from the parents and children of the Japanese Language School.”

Dinner hosts will dress in yukata, the traditional Japanese dress and run activities, including the making of a thousand origami cranes, which according to legend, can make a person’s wish come true.  Guests will also have the opportunity to purchase origami earrings and hear Japanese singing.

There is no entrance fee, but  tickets for the dinner will cost $10. Ticket sales should start soon. Check the Pray for Japan Facebook event page to learn more.

To date, more than four thousand dollars have been raised at UFV and in the community. “We hope to raise another $2,000 on March 31,”says Ayaka. All donations will go to the Canadian Red Cross to help with earthquake relief in Japan.

To show your support, attend the March 31 event at U-House, donate at one of the outlets on campus, or bring your gift to UFV International.