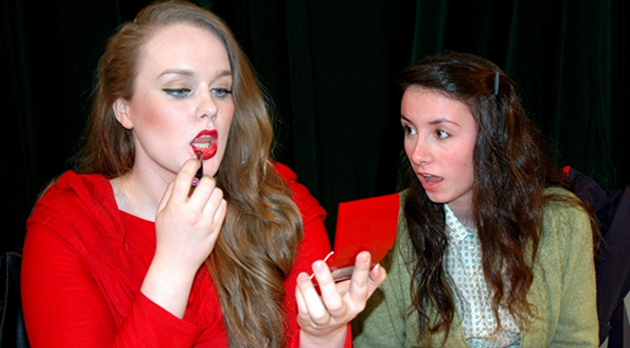 Due to several performance cancellations due to severe weather conditions, the production has been held over until Jan 29, with performances at 7:30 pm on Thurs, Fri, and Sat, Jan 26-28, and a 2 pm matinee on Sun, Jan 29. Contact 604-795-2814 or theatre@ufv.ca for tickets. (UFV employees note: the prodcution features UFV English professor Virginia Cooke in a key role.)

An incessantly ringing cell phone in a quiet café; a stranger at the next table who has had enough, and a dead man – with a lot of loose ends. So begins this intriguingly dark yet hilariously funny work.

Dead Man’s Cell Phone is a play that examines how we memorialize the dead, and how that remembering changes us. It is the odyssey of a woman forced to confront her own assumptions about morality, redemption and the need to connect in a technologically obsessed world.

Set design for this production is by Lisa Apps, with costume design by Catrina Lewis. Lighting design is by Mark Sutherland and sound design by Gabriel Kirkley. Stage manager is Rebekah Briscoe.