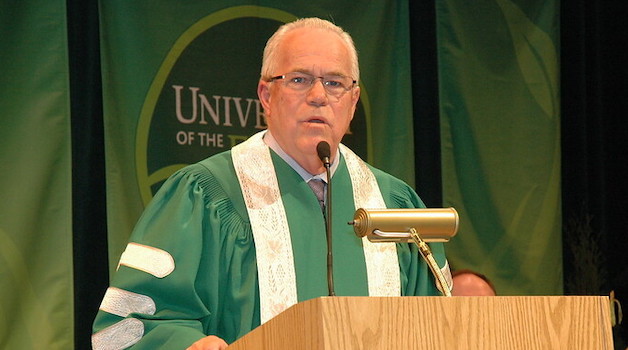 When Dr. Skip Bassford agreed to take up the presidency of the University College of the Fraser Valley in 1998, it was because he was intrigued by a concept.

The university colleges of British Columbia were unique types of post-secondary institutions – ones that combined degree-level university studies with applied disciplines. This meant not only offering trades training, upgrading, and career programs as well as bachelor’s degrees, but integrating an applied focus into the university programs.

When he left 11 years later, handing the presidency over to Dr. Mark Evered, it was as president of the University of the Fraser Valley.

The name may have changed, but Bassford hopes that his legacy will be that the focus has not: UFV still offers a unique and cutting-edge combination of applied and theoretical studies in a university environment.

“When I first came here, the group of university-college presidents was quite proud of the new type of education that we were forging, but we felt we needed a way to tell the world about the university-college model,” he recalls. “It became clear, however, that people, especially those outside of British Columbian, just didn’t ‘get’ the university- college name.”

So the focus of his presidency changed from making the world understand the university-college model to achieving a name change for UCFV while keeping its applied, comprehensive, and regional focus.

“We decided that we needed a name change so that our students and faculty would get the recognition and respect they needed. We were, in essence, a university. It was time for our name to reflect that so that it would be easier for our students to get into graduate school or employed, for us to recruit faculty and attract international students, for our communities to understand what we offer, and for us to attract donors.”

So for at least six of his years as president, Bassford was a relentless campaigner for university status. He balanced lobbying the provincial government with community education, giving more than 100 talks to community groups to assure them that even as a university, UCFV would be responsive to its communities and comprehensive in its offerings.

The 2005 provincial election came and went without the hoped-for university status. University colleges in Kamloops and Kelowna were changed into universities without a similar prize for the Fraser Valley. Then, in 2006, the provincial government appointed former cabinet minister Geoff Plant to lead the Campus 2020 initiative, tasked with reviewing the post-secondary system and making recommendations about its future. When Plant brought his road show to Abbotsford, the Fraser Valley responded by filling the Ramada Inn ballroom to overflowing and bringing a unanimous message: “we want university status for UCFV now.”

“When Geoff Plant came out and found more than 900 people rallying for a university, that made it almost impossible for him to not recommend it for us,” Bassford recalls with a chuckle.

It took until the spring of 2008 for the provincial government to respond, when UCFV was the first of five institutions that Premier Gordon Campbell visited to bestow university status.

So when Bassford took the stage for his last Convocation ceremonies in June 2009, he had the pleasure of presiding over the first graduating class of the University of the Fraser Valley.

But Bassford wasn’t a one-issue president. During his 11-year term he also worked to increase international ties and community outreach, most notably by working with the local Indo-Canadian community to raise $2.5 million for the Centre for Indo-Canadian Studies, a BC Regional Innovation Chair in Canada-India Business and Economic Development, and a UFV centre in Chandigarh, India, which offers UFV’s Bachelor of Business Administration to a cohort of Indian students.

“I remember at one of the first meetings I had with UCFV employees, someone commented that we didn’t have a good connection with our local Indo-Canadian community, and I replied that we’d have to make that happen. I think we can safely say that we’ve done so now. It’s important that we look at the cultural fabric of our communities and ensure that what we’re doing brings them into our embrace. That’s why I’m proud to note that two days before I finish up here I’ll be presiding over the signing of an agreement for a Mennonite Studies centre at UFV.”

Then there was another project that required plenty of patience: procuring land at the former Canadian Forces Base Chilliwack, now the Canada Education Park, for a new UFV Chilliwack campus.

“That was a long hard process,” Bassford recalls. “I believe that the new Canada Education Park will play a very significant role in our future. It took a lot of negotiation, a lot of help from some key board members, the cooperation of the City of Chilliwack and the Chilliwack Economic Partners Corporation, the support of the provincial government, and the willingness of the federal Canada Lands department to make that deal happen.”

UFV is now the largest landowner at the Canada Education Park and it opened its new Trades and Technology Centre there in 2008. It hopes to eventually relocate its entire Chilliwack campus to the CEP.

Another hallmark of Bassford’s time at UFV is the sheer growth that the university has undergone, more than doubling in size since he took the helm. Much of that can be attributed to the burgeoning Fraser Valley population making it hard to ignore the need for growth funding in this area, but it still required constant lobbying to achieve the boost in student numbers.

With that growth came a maturing of campus life. Although still a commuter campus for many, UFV now boasts a student residence, a large athletic centre with two gymnasiums and a fitness centre, a student pub, and an aerospace training centre at the Abbotsford international airport, all built during Bassford’s tenure. Several of UFV’s athletic teams have joined the national Canada Inter-university Sport (CIS) league, another achievement of which the sports-mad Bassford is particularly proud.

On the programming side, during Bassford’s era UFV added a Bachelor of Kinesiology, a Bachelor of Fine Arts, several new trades programs, a post-graduate teacher education program, and the university’s first master’s program, an MA in Criminal Justice. He says he’s proud of UFV’s continued focus on teaching, but also of how UFV has integrated a growing and significant research component into that teaching focus.

As he looks back on more than a decade at what started as the presidency of UCFV and ended as the top job at UFV, Bassford credits the legendary UFV culture with helping him to achieve much of what was accomplished during his time at the helm.

“The working climate here was wonderful. There was goodwill from the union, the administration, and the board. To be able to come to the end of one’s career in a position of leadership in a significantly developing post-secondary institution was a very satisfying way to spend 11 years. I can exit with a very positive attitude instead of a cynical one.”

He also credits the Fraser Valley community with embracing UFV.

“Interest in education has increased tremendously. As the nature of our economy and society changes, people see more and more need for advanced education. UFV has been out there helping people to get to know us, and we’ve been welcomed as an integral part of the communities we serve.”

Bassford and his wife Jane Darville are moving to Toronto after he completes his term at UFV this month, but he looks forward to returning for special events. A bursary in their name has been established by UFV. To contribute, contact the UFV Development office at 604-854-4595 or  giving@ufv.ca  .