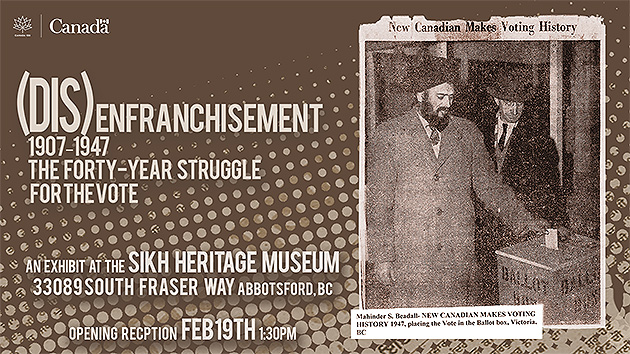 The Indo-Canadian community has been part of the Canadian multicultural mosaic for more that 100 years.

Its members contributed to society and help build the economy during the early decades of their time here without having the right to express their opinions through voting in provincial or federal elections.

In current times, candidates running for public office pay close attention to the Indo-Canadian community in the hopes of securing votes from that demographic, but for 40 years in the 20th century, the community was disenfranchised.

A new exhibit curated by UFV’s Centre for Indo-Canadian Studies (CICS) examines the 40-year struggle to attain the vote for Ind0-Canadians.

(Dis) Enfranchisement 1907-1947: The Forty-Year Struggle for The Vote offers a different perspective in uncovering Canada’s historical past as we commemorate the 150th year of Canadian Confederation. The exhibit is funded by a Canada 150 grant from the federal government.

The exhibit will be displayed in the Gur Sikh Temple’s Sikh Heritage Museum in Abbotsford, BC (a national historic site).

The exhibit launch and reception will be held at the Sikh Heritage Museum located at 33089 South Fraser Way in Abbotsford, BC on Sun, February 19 beginning at 1:30 pm.

All are welcome to attend and the exhibit will be available for viewing throughout this important year.

“Using this heritage site as the location for the exhibit  challenges ethnocentric narratives by highlighting Sikh community history as part of BC heritage,” notes Satwinder Bains, director of UFV’s Centre for Indo-Canadian Studies.

“The idea originated from our research on the 100+ year history of Indo-Canadians to BC and the struggles and trials they faced in the first five decades in particular, from the turn of the century through to the 1950s,” says Bains. “As Canada commemorates its 150 years of confederation, we mark this anniversary with the development of a history that is very often erased, omitted, or ignored in the Canadian record. The Indian immigrants to the west coast were denied rights that were automatically extended to those of European origin arriving on these shores at the same time, the most important of which was the right to vote. It would take 40 years, from 1907 to 1947 to win back the vote. This exhibit investigates that time period and records the difficulties of time, place and politics.”

While the exhibit focuses on British Columbia as a whole, there are Abbotsford community and family histories featured, including those of the Inder Singh Gill and Sucha Singh Thandi families. Lumber barons like the Mayo family of Vancouver Island also played a significant role in the campaign for the right to vote, as did the Khalsa Diwan Society, of Abbotsford and Vancouver.

Bains says it’s important to focus on some of the “not so good” history of Canada during the Canada 150 celebrations.

“These  narratives are just as important because it is the history that we are apt to repeat if we have no knowledge of it. The youth of today need to know our long struggles so that we may protect what which so many fought so hard to gain,” she says.

“As a Canadian, I am proud of the freedoms we all enjoy in this great nation,” says Abbotsford Member of Parliament for Mission-Matsqui-Fraser Canyon Jati Sidhu. “As a Sikh, I am proud of those who came before me and who fought for their right to enjoy those freedoms. I have no doubt this exhibition will strike a powerful chord to all who have struggled for equality or stood up for the rights of others.”