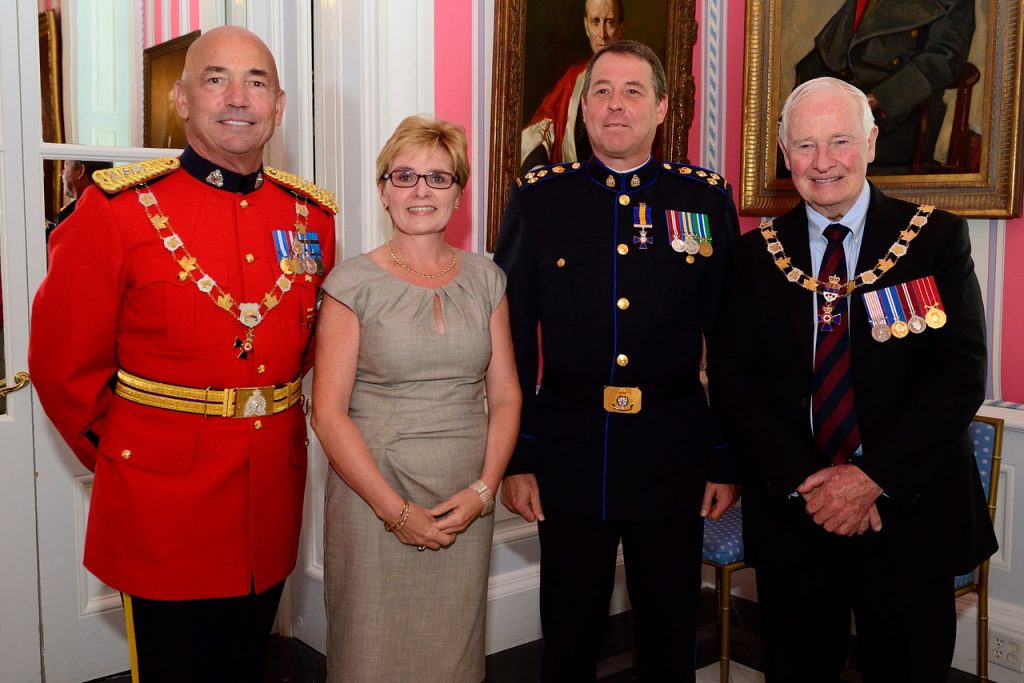 Chief Constable Len Goerke (second from right) with His Excellency the Right Honourable David Johnston, Governor General of Canada (right), who  presided over an Order of Merit of the Police Forces investiture ceremony at Rideau Hall.

Chief Constable Len Goerke, a career police officer with many connections to UFV, has been made a Member of the Order of Merit of the Police Forces. This national designation recognizes exceptional service or performance of duty over an extended period, usually at the local or regional/provincial level.

Goerke, who earned his BA from UFV in 1998,  is Chief Constable of the West Vancouver Police Department.

He visited Ottawa recently to be invested in the Order of Merit along with officers from across Canada, at a ceremony presided over by His Excellency the Right Honourable David Johnston, Governor General of Canada.

Goerke was among 46 officers named as Members of the Order of Merit of the Police Forces.

Goerke is being honoured for a distinguished 29-year policing career.  Chief Goerke joined the West Vancouver Police in 2014, after a 27-year career with the Abbotsford Police that concluded with service as the Deputy Chief.

Goerke is currently a member of the UFV Board of Governors, and has served as a sessional faculty member in the UFV School of Criminology and Criminal Justice.

He has also been active with the UFV Alumni Association, having served in several roles on the Board of Directors.

In 2013 Goerke was awarded the Queen’s Diamond Jubilee Medal.

Goerke was profiled in the Spring 2010 edition of the UFV Alumni magazine, at which that time he espoused the values of a broad, liberal arts education for police candidates. He attended UFV part time as a mature student while already established as a police officer with the Abbotsford Police Department. He also went on to earn a Master of Arts in conflict analysis and management at Royal Roads University.