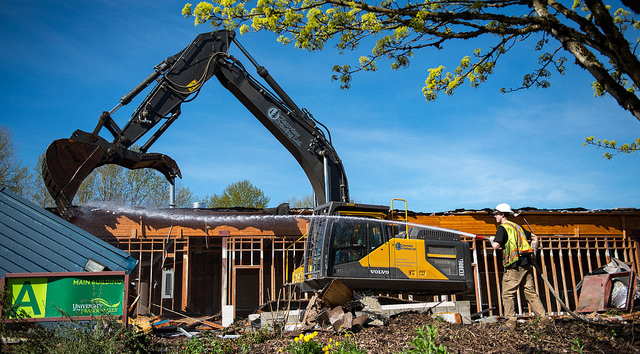 A piece of UFV history came crashing down the week of March 29 to April 1 as demolition crews dismantled Building A on the Chilliwack North campus on Yale Road.

See video of the demolition here.

Designed as a temporary home for Fraser Valley College, the building, known colloquially by some as The Motel, served as a key part of the Chilliwack campus for 37 years, starting in 1975, a year after FVC opened. It contained administrative offices, faculty offices, the library, classrooms, and study space. It has not been in use since the employees and services it housed moved to the new Chilliwack campus at Canada Education Park in 2012.

For many years, people referred to the building as The Motel. Not many people, however, know why. Many mistakenly believe that it was once a motel that was converted into a college campus, or that it was built as a motel and the college swooped in at the last minute and turned it into a college building.

Some local developers owned the property at Yale and Airport Road, and offered to put up the building and lease it to the college for a few years. The thought was that after the college was done with the property, it could be converted into a motel. Thus the nickname.

“Larry Blake had been involved in college start-ups before, and he knew what we needed,” recalls Dick. “He worked with the architects to design a very basic building with a library, classrooms, cafeteria, and open meeting place. It was a very inexpensive building, not built for the long-term. It was meant to be temporary quarters.”

A few years after the building opened in 1975, the provincial government decided to buy the land at Yale and Airport for a long-term home for the Chilliwack campus. So the college went from being tenant to landlord of the Yale Road campus. More buildings followed: the basic agriculture building in 1987, and the health sciences centre in 1992. Eventually, funding was secured for what was to be the building of a more permanent Chilliwack campus. The classroom complex (Building D), performance theatre, and student services building opened in 1995.

A new administrative/library building to replace the “motel” was designed and was slated to immediately follow construction of the Building D classroom complex, but it was put on hold in the mid-1990s. It was resurrected in the early 2000s, and new plans drawn that took into account the need to build high enough to be out of the flood plain, but died on the drawing board again in 2002 due to a funding freeze.

UFV then entered a phase of actively pursuing the former Canadian Forces Base Chilliwack for a new Chilliwack campus. This led to purchase by the provincial government of 34 hectares at what is now called the Canada Education Park for UFV in 2007, and the opening of a new Trades and Technology Centre there in a renovated building in 2008, and other renovated buildings (Building A, V, W) in 2012. The Agriculture Centre of Excellence followed in 2014.

Chilliwack North is currently home to the UFV Theatre program, including the performance theatre opened in 1995.

UFV now has offers from two interested buyers that may result in some changes to a large portion of the property — though no changes are planned for UFV programs or buildings actively operating at Chilliwack North.

The first offer involves a residential development on approximately 13 acres of the back property and the second offer involves a private school development (kindergarten to Grade 9) on approximately six acres of the front property (Building C). Both parties are working with UFV and the City of Chilliwack regarding their plans for the property and could complete over the summer if they achieve the necessary approvals.

Campus Planning is working closely with the Theatre program and current rental occupants to ensure access and services continue for buildings D, E and G. The university looks forward to continuing to offer Theatre productions at this location and on-going activity from rental partners, as well as increasing Theatre courses and productions in Abbotsford.

More information will be available as this development progresses and can be found at: www.ufv.ca/campusplanning

The proposed plans for residential development, by Chilliwack-based developer Eric Van Maren, can be viewed here. The name for the proposed new development is Midtown.