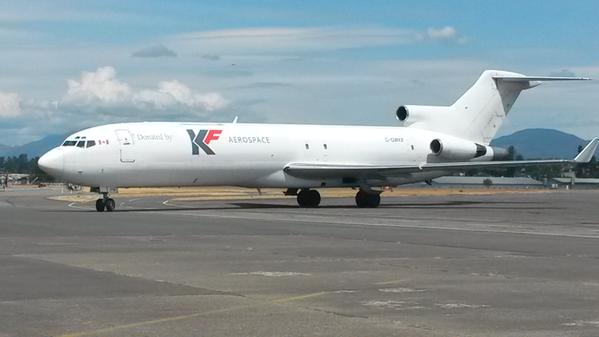 A large, loud donation touched down at the Abbotsford International Airport July 15, when the University of the Fraser Valley received a Boeing 727-200 jet aircraft donated by KF Aerospace (formerly Kelowna Flightcraft). The 727 will be utilized by the next generation of technicians training in UFV’s aerospace programs.

After nearly 40 years in service, the aircraft will provide a real-world learning environment for trades skills training critical to the aviation industry. The jet will be utilized by students as they learn aircraft structure repair, maintenance, assembly, and modification.

“We are very pleased to receive this wonderful aircraft. It is a perfect platform for today’s students to learn the skills needed for a career in the structures area of aviation,” said John English, UFV’s Dean of Applied and Technical Studies. “There is no substitute for real-life learning and this donation from KF Aerospace helps build the skill and knowledge base for the aviation industry in our province and beyond.”

This particular 727 has been a flying workhorse since entering service in 1976. The three-engine jet has completed over 45,000 flights for several airlines including Air Italia, Continental Airlines, Purolator, and KF Aerospace, where it was primarily used to service Purolator. Retiring into a learning environment is a fitting conclusion to its airborne career.

“I am glad we could assist UFV as they continue to grow their aerospace programs and train the next generation of people who will work on aircraft,” said Barry Lapointe, founder and CEO of KF Aerospace. “I strongly believe in supporting the training of our future employees — it is critical to the success and growth of our business and the aviation industry in BC.”

Founded in 1970 by Barry Lapointe and Jim Rogers, the company began providing maintenance services to aircraft in Western Canada, and now provides a wide range of aviation services to corporate, commercial, and military customers worldwide. KF Aerospace is extremely proud to be a strong contributor to the Canadian Aviation community for 45 years.

The UFV Aircraft Structures Technician program is offered at UFV Aerospace Centre at the Abbotsford International Airport. It is Transport Canada approved and provides a thorough introduction to the aircraft repair and aircraft maintenance trade including: