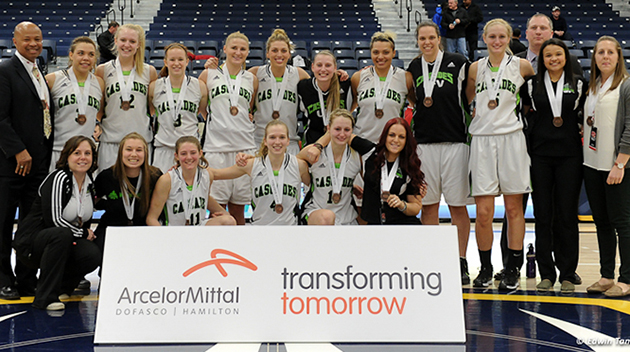 Windsor — The UFV Cascades women’s basketball team took revenge for last weekend’s Canada West Final Four defeat by downing the Saskatchewan Huskies 69-57 in Sunday’s CIS consolation final and grabbing the bronze medal (the first CIS medal in program history). Last week the Huskies beat the Cascades by 11, tonight the Cascades returned the favour by 12, proving themselves as the third-best team in the nation.

On Sunday, just like during the Canada West finals, program pride and some considerable hardware were on the line for both UFV and Saskatchewan. From the start the Cascades were out to prove themselves as the best in the west, and fulfill a program dream that has been in the works since the Cascades’ current seniors were rookies five years ago. Most people don’t remember that 2009-2010 season when the Cascades went 2-18 with a mostly untested roster, relying on coach Al Tuchscherer’s promise that the future would be better. That year the Cascades learned what it felt like to lose, and promised themselves that they’d also learn how it felt to win.

Sunday was the culmination of those promises, both for coach Tuchscherer and for his team. The four Cascades players who played in 2009-2010, Aieisha Luyken, Courtney Bartel, Nicole Wierks, and Samantha Kurath, have just finished their final game as Cascades — and left a lasting legacy of success for the program. Five years ago UFV was at the bottom of the Canada West; the team has claimed a national bronze medal. This team, this moment, is special in too many ways to count.

The fifth-seeded Cascades entered tonight’s game as the underdogs, both because of last week’s loss and the Huskies’ position as the tournament third-seed. UFV knew they needed to do two things: control Canada West Player of the Year and Defensive Player of the Year Dalyce Emmerson, and find a way to open up the paint and run some offense. In the Canada West final Emmerson had made herself a one-woman army with 19 points, 22 rebounds, and 8 blocks, something the Cascades could not afford to let happen again.

Despite that necessity, the game plan suffered a serious blow right out of the gate as UFV’s top-scorer and top post-defender Sarah Wierks picked up two quick fouls and withdrew to the bench. Without Wierks on the floor, the Cascades were forced to call upon Kaitlyn Brink and Shayna Litman, neither a great match-up against Emmerson on paper.

Yet what was on paper didn’t seem to have much bearing tonight. Litman played only 17 minutes, but picked up 8 points and 6 rebounds against larger opponents. Brink scored five points and played one of her best defensive games of the year. Together they almost matched Emmerson’s total of 16 points and 6 rebounds, giving the Cascades the chance to rest Wierks and keep her out of further foul trouble.

The Cascades trailed the Huskies 13-12 after the first quarter, and led 30-27 at half, but it was the third quarter that decided the game and truly showcased the formidable skill of this UFV squad. In that single ten minute span the Cascades scored 25 points, shooting 47.4 percent from the floor, including 62.5 percent (5-8) from downtown. Courtney Bartel caught fire and hit 3-3 from behind the arc, while Kayli Sartori caused all sorts of trouble driving to the rim. Pulling a trick from a Hollywood sports film, Sarah Wierks hit a buzzer-beater trey in the last second of the quarter to put the Cascades ahead 55-40. It was her only three-pointer of the season, and one of only three attempts over the same span.

The Huskies never recovered, indeed the Cascades wouldn’t let them. In the fourth Brink drew a charge from Emmerson that forced a Saskatchewan time-out, and continued to play steller defense to hold the Saskatchewan star to less than 50 percent shooting from the field. Nicole Wierks, Luyken, and Nataliia Gavryliuk all chipped in baskets to keep the Cascades lead in double-digits as time elapsed and then expired, sealing the win for UFV.

Sartori, with 13 points and 9 rebounds, was named Player of the Game. Courtney Bartel, with 12 points, finished 4-8 from behind the arc. In her final game as a Cascade, Luyken amassed 8 points and five assists.

The Huskies were led by Kiera Lyons with 18 points (16 of them in the first half), and Emmerson.

“I’m just really proud of the squad, and I think we played our best basketball of the season this weekend,” said Tuchscherer. “We had the opportunity to play three top quality programs and just had a great experience in Windsor. I’m really happy for our seniors, it’s such an awesome way for them to finish.”

“This is something that Al’s been working hard to accomplish for years with this group,” said assistant coach Sean Bosco. “When he started recruiting these girls that are graduating, he had a vision in mind for something like this. For them to realize that vision is very humbling for a coach. They never stopped believing in the vision that he set up for them, and here they are today as a top three team in the nation. I’m proud of the way our players supported each other today, not just our fifth-years, but also some of our younger players that came off the bench. The legacy that some of our older players are leaving is fantastic.”