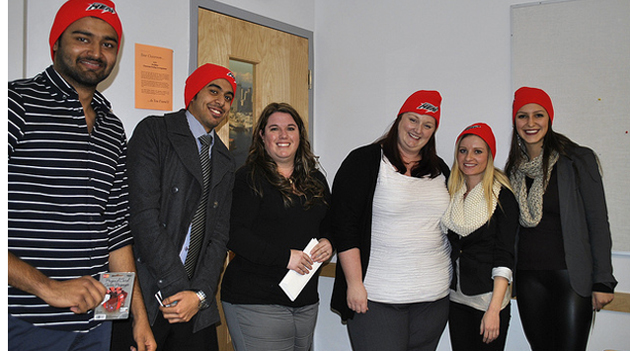 The winning team in the BUS 320 marketing presentations wearing their Abbotsford Heat red toques. They are pictured with Roxann Bury (third from left), senior manager of marketing and sales for the Heat.

There’s more than one reason to attend a hockey game. And there’s a lot of competition for people’s attention and money when it comes to choosing how to spend leisure time.

The marketing team at the Abbotsford Heat hockey club knows this. Thus they were happy to tap into some student brain power recently when they worked with University of the Fraser Valley business students to find out what would inspire people who had attended a Heat game to continue coming out, and what would draw new customers.

The Abbotsford Heat is an American Hockey League club and the farm team of the Calgary Flames of the National Hockey League.

The five student groups each conducted primary and secondary research into what motivates Heat fans. Secondary research included using the UFV Library to consult journal articles and other resources about the business and psychology of sports marketing. Primary research included customer surveys and focus groups. The assignment culminated in a competition between the five student groups, with each group taking turns presenting to members of the Abbotsford Heat marketing team, including senior manager of marketing and sales Roxann Bury, VP business operations and communications Adam Fritz, and director of ticket sales and service Jesse Maxson.

The students, all dressed in business attire and putting their best presentation skills into practice, summarized their research and made recommendations, using Powerpoint and props to illustrate key points.

Some of the more memorable quotes from the presentations were:

“How do you turn a couch potato into a Heat fan?”

“There are more than 500,000 people in the suburban communities, and many of them are closer to Abbotsford than to Vancouver.”

“What you’re selling is more than a hockey game — it’s an experience.”

Roxann Bury of the Abbotsford Heat said after the presentations that she enjoyed working with the students.

“They reinforced a lot of what we’re currently working on, such as enhancing our website, and they also gave us good, solid facts that we can build on,” she said. “I love working with students. They were unbiased, and motivated by their desire to get a good grade and work with an actual client. I think that maybe the fans they surveyed were more honest with the students than they might have been if it was us surveying them directly. And it’s great to hear from the different mindsets. Some of the students were also parents, and there were different ethnicities represented, so it was good to hear their perspectives.”

The group that won the competition — consisting of Sangram Singh, Jennifer Clary, Madison MacAulay, Albiona Mjekiqi, and Akershit Sharma — went the extra mile by not just researching improvements, but suggesting how to implement them, even showing up with a branded Heat in Your Seat cushion that they envisioned hockey moms taking to their kids’ games and thus spreading brand awareness.

Frank Ulbrich, the new director of the School of Business at UFV, sat in on the presentations, and praised the students for their hard work afterwards. He said he liked their ideas and creativity, and reminded them to always ground their suggestions in market research before implementing them.