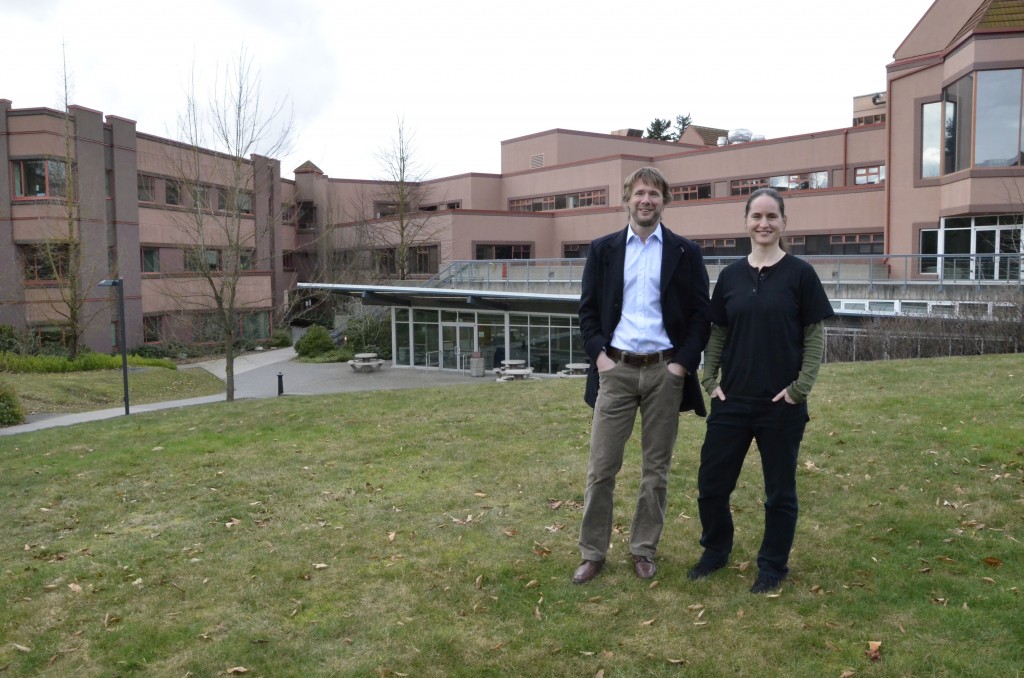 The duo, who both recently earned their PhDs (aka doctorates), are the first post-doctoral research fellows to work at UFV.

Both working under the supervision of Geography professors at UFV, Nixon with Dr. Lenore Newman and Neudorf with Dr. Olav Lian.

A post-doctoral fellow is an individual holding a research doctoral degree in a temporary period of mentored research or advanced training, linked to a university or institute, to acquire competencies for a research-intensive career.

“A post-doctoral researcher is essentially someone who has finished their PhD and they are performing research, but they don’t have a permanent tenure position yet,” says Nixon. Working closely with Newman, he is focusing on research in food safety in Canada, including the nexus between transportation and food access.

Neudorf, who is funded as a Haiki Scholar by the Hakai Network for Coastal People, Ecosystems and Management, is looking at sea level change in coastal sediment at Calvert Island, British Columbia.

Simon Fraser University is also a partner in the project, which is designed to “evaluate the influence of regional neotectonics, isostasy, and resultant changes in relative sea levels on the coastal geomorphology of northwest Calvert Island, British Columbia,” according to a summary on the project web page.

Aside from the excitement of UFV’s first postdoc researchers, their presence brings with it more than just bragging rights.

“The actual research results can always feed into courses,” explains Nixon, which has benefits to both the students and faculty. Aside from that knowledge, it also “increases research being published for UFV.”

Overall, both Nixon and Neudorf say that their time at UFV has been nothing but great. “One thing I will say, I am amazed at how friendly people are here, staff and students. I will walk down the hallways and random people will say hi to me. It’s pretty awesome,” says Nixon.

Both post-doctoral fellows have UFV e-mail addresses and can be contacted for further information about their research.