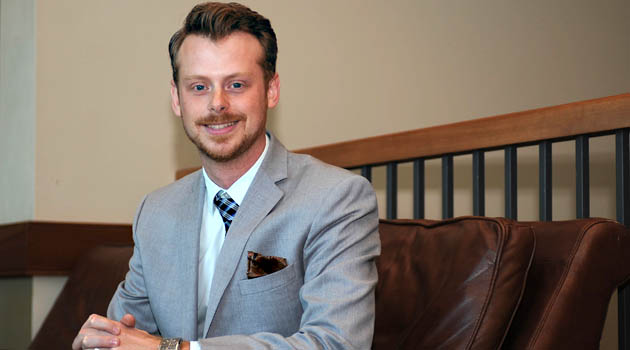 Alex McAulay has always been a hardworking, multi-tasking individual. From his time spent studying and volunteering at the University of the Fraser Valley, to his involvement with the community of Chilliwack, he’s been a busy guy with multiple things on the go. Now, he’s taken his drive and education and is applying it to the world of business.

As the CFO of Naked Underwear, he has appeared on CBC’s Dragons’ Den, and helped raise over a million dollars in funding for the successful start-up.

On Wednesday evening, UFV recognized McAulay’s accomplishments by presenting him with the Young Distinguished Alumni award.

“We’ve discovered that many of our young graduates are doing really great things,” said UFV alumni relations manager Nancy Armitage. “We’re a young institution, and we’ve only been graduating our students for a short number of years. But we see them achieving excellence in their lives and really being worthy of this honour.”

While several strong nominations were submitted, McAulay came out on top.

For McAulay, receiving the award is an honour – so much so that he and his new wife Kaila decided to delay their honeymoon to accept the award on Wednesday evening.

As he entered his third year of studies, he became heavily involved in the university. Already representing the citizens of Chilliwack on the Board of Education, McAulay also became president of the Business Administration Student Association President.

McAulay also sat on the Board of Governors, and took part in the presidential search, which helped in the process of hiring UFV president Mark Evered.

McAulay has since worked as a chartered accountant, and as the president of Chilliwack Community Services.

“It’s a pretty amazing experience being able to put all your university and professional training into your work like I have, and I’m only 28,” said McAulay. “So it’s hard not to be excited about life.”

“Everyone at university is so intelligent and strong mentally, so it becomes painfully obvious that you can accomplish so much more working with people then trying to do things on your own,” said McAulay. “I truly learned how to delegate and empower once I had that mindset.”