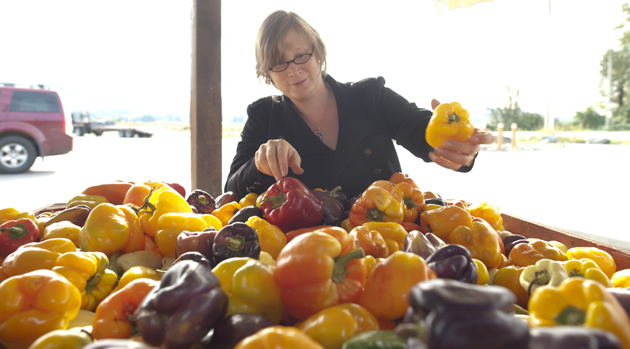 The University of the Fraser Valley has a new federally funded researcher on campus. Dr. Lenore Newman was recently appointed Canada Research Chair in Food Security and Environment and joins the Geography department at UFV. She will also be working closely with the UFV Agriculture department.

Newman will fill the second Canada Research Chair position at UFV. The first is held by professor Hugh Brody, a cultural anthropologist and filmmaker.

“Receiving funding for a second Canada Research Chair is a strong sign that the government of Canada recognizes that we are serious about research at the University of the Fraser Valley,” said UFV associate vice president of research and graduate studies Yvon Dandurand. “And the research that Dr. Newman will be doing is directly relevant to the interests of our region, which is in the middle of rich agricultural land yet also facing development pressures.”

Newman comes to UFV from Royal Roads University in Victoria, where was an assistant professor in the School of Environment and Sustainability, and head of the Master of Environmental Management program.

Her research interests include food security; sustainable food systems/urban food systems; place, space, and urban nature; and urban spatial geography.
Newman holds a PhD and a master’s degree, both in environmental studies, from York University, and a BSc (honours) in physics and astronomy from the University of British Columbia. She has travelled extensively and developed a strong interest in sustainability partly as a result of those travels.

As part of her appointment, Newman will be investigating Canada’s foodways, or how food defines Canadians and their culture. She will also be looking at environmental and social threats to food sustainability. The location of UFV in rural zone at the edge of a growing metropolis provides a perfect living laboratory for her research.

Newman will be crossing the country finding “foods of locality”, talking to food producers and chefs, and recording her research through film and still photography, along with other methods.

“The Fraser Valley is a fascinating region. It’s different from Vancouver but it’s changing rapidly. Abbotsford is one of those edge cities with typical post-modern development where you see farms, suburbs, and urban environments all intermingled. There are major tensions between farmers’ interests, encroaching development, and preserving the rivers that the salmon need to survive.”

In addition to her federally funded research activities, Newman will do some teaching and community volunteering as part of her UFV posting. She is currently teaching an introductory course in human geography and sitting on the board of the Abbotsford Agricultural Trust.

Although her studies and research have taken her across the country and she has travelled the world, Newman is a British Columbian at heart.  She grew up in Roberts Creek on a Sunshine Coast and came from logging and fishing family.

An activist for LGBT rights, she views the university environment as a place where “people can speak to each other and debate social issues and communicate without ripping each other apart.”