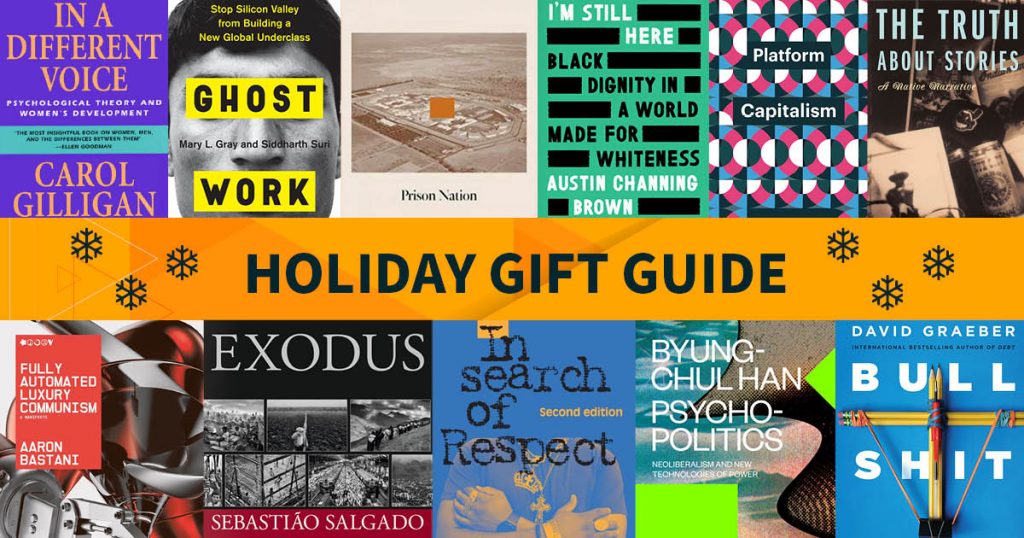 In the spirit of our CHASI values, members of the Hub have compiled a list of what we’re reading as a helping hand to buy for that social justice-minded, activist-academic in your life for this holiday season.

Psychopolitics: Neoliberalism and New Technologies of Power by Byung-Chul Han.
Written by Korean-born cultural theorist, Byung-Chul Han, this collection of essays examines how freedom itself is a technology of control—a new and more efficient form of self-subjectivation and self-subjugation. As Han attests “the freedom of can generates even more coercion than the disciplinarian should. Should has a limit. Can does not”. In these essays, Han maps the ways in which pathologies such as anxiety and depression are too often individualized and prescribed at the individual level. Rather, as Han emphasizes, these “psychic maladies” are structural pathologies brought on by excessive freedom and neoliberal exploitation. I highly recommend his chapters on emotions and emotional capitalism.

Fully Automated Luxury Communism: A Manifesto by Aron Bastani.
An interesting take on automation—essentially the antithesis to the neoliberal take. As someone who spends a fair amount of time reading about what is wrong with the world, I was interested to hear about how automation can make our lives better… skeptical but interested. This is a thought-provoking and strangely optimistic read. Convincing? I am not too sure but would be happy to discuss with anyone who takes up this read.

This review from the Guardian captures my thoughts on it rather well… “In the doomy world of 2019, to come across this forecast is quite a shock. Enormous optimism about humanity’s long-term future; faith in technology, and in our wise use of it; a guilt-free enthusiasm for material goods; and yet also a belief that an updated form of communism should be 21st-century society’s organising principle–these are Bastani’s main themes. The immediate temptation is to see the book as some sort of joke: a satire, or a political prank.
In a surprisingly earnest and stiff opening section, he repeatedly lays out the book’s core argument. The world is in an unprecedented crisis–environmental, economic, social, demographic. Yet the left and the green movement’s conventional solution to it–essentially to tame humanity through regulation and self-restraint–is the opposite of what’s needed, Bastani says. Technology, guided by activist leftwing governments, should be used to intensify our “mastery” of the planet, and to extend it to places beyond. The result will not just be our world’s survival, he promises, but the creation of a new world of social justice and limitless abundance, with goods produced at almost no cost, and then freely and equally distributed”

In a Different Voice by Carol Gilligan.
I recommend Carol Gilligan’s “In a Different Voice” – it’s a remarkable read and has been referred to as, “the little book that started a revolution.” It is early writing on the development of an ethics of care, as well as women’s voice in relationships and theory, two topics I am deeply passionate about.
Here’s an excerpt:
“An internal or internalized voice told a woman that it would be ‘selfish’ to bring her voice into relationships, that perhaps she did not know what she really wanted, or that her experience was not a reliable guide in thinking about what to do… I had come to learn from [my participants], many women in fact did know what they wanted to do and also what they thought would be the best thing to do in what often were painful and difficult situations. But many women feared that others would condemn them if they spoke, that others would not listen or understand, that speaking would only lead to further confusion, that it was better to appear ‘selfless,’ to give up their voices and keep the peace.”

The Truth About Stories: A Native Narrative, by Thomas King.
Poetic, powerful, sparks of humour.. you feel like you’re sitting rapt at a fire with this master storyteller who says so much with so little, taking you through oral histories and tales and intertwining his own personal story and academic lens to explore the roots of some of our toughest problems.

In Search of Respect: Selling Crack in El Barrio, by Philippe Bourgois.
My favourite ethnography of all time. The kind of humanizing and rich exploration that can only come from anthropology of the highest form. It was published in 1995 but so relevant today for anyone wanting to understand the displacement and disenfranchisement of whole communities within one of the richest countries in the world, and how these circumstances create a breeding ground for gangs and violence for reasons we can all understand. Absolutely transformative academic work that feels like a novel.

I’m Still Here by Austin Channing Brown.
Consider gifting the audiobook, read by the author herself. This book is an incredibly well written exploration into what it means to be black, female and Christian in America. Brown seeks to explore what unity and inclusion really look like in such a divided time as now.

Platform Capitalism by Nick Srnicek.
Platform capitalism provides an important examination of the ways in which platform technologies continue to permeate even the most mundane intricacies of everyday life. Wrestling with issues of surveillance, geopolitical relations, and the possible futures of the nation-state apparatus, Srnicek produces the foundations of an assemblage of forces specific to our moment in capitalism.

Ghost Work: How to Stop Silicon Valley from Building a New Global Underclass by Mary L. Gray and Siddharth Suri.
Will artificial intelligence (AI) eventually replace human labour across the economy? To what extend is AI poised to threaten our labour market and to what extent can algorithms automate tasks? Is the technology as advanced as we thought? Written by anthropologist Mary L. Gray and computer scientist Siddharth Suri, the book takes a glance at ghost work in big tech companies. Today’s AI technology might not be as smart as you think. They define ghost work as the “human labor powering many mobile phone apps, websites, and artificial intelligence systems.” Ghost workers perform work such as flagging X-rated content, proofreading, designing engine parts, and much more. Ghost workers are supporting the seemingly automated production systems but their work is often concealed and devalued. At the same time, the authors also indicated the new opportunities of ghost work. The book gives us a glimpse of what it will be like for us to work in the future.

Bullshit Jobs: A Theory by David Graeber.
The pandemic gives us an opportunity to slow down and reflect our lives. Does our job really make a contribution to the world? Can we convince ourself that the work we’ve been doing for years are meaningful to ourselves, or to the boarder society?  Anthropologist David Graeber argues many of us are forced to perform complex but worthless administrative jobs. A city cannot function without hospital cleaners, recycling workers and nursery workers, but a city might function better without city bankers. It is so important for us today to examine our life and to think about the past and future during this challenging time.

Exodus by Sebastião Salgado.
In 2016 Taschen released a new edition of Salgado’s epic work on human movement around the globe. Get lost in the black and white imagery from a project that spanned six years and 35 countries, as the documentary master captured mass refugee motion across the globe. An insert supplement provides important information for the photos. This is required on the coffee table of all fans of photography who care about the people on this planet.

Prison Nation, Aperture Issue 230, Spring 2018.
Never a title to shy away from tackling issues head on, Aperture does its work to break through the walls of the prison industry with this “magazine” that examines America’s story of mass incarceration through incredible photography and conversations.