January 29 is the National Day of Remembrance and Action on Islamophobia. We at CHASI, and our colleagues at PARC, urge you to educate yourself about Islamophobia, to think critically on how your own views and actions have been influenced by it, and to consider how you can combat its presence in your own community. Writing on the topic, we are pleased to welcome the insights of Shaheen Shivji, the Program Coordinator at UFV’s Peace and Reconciliation Centre (PARC).

A name is a global source of learning and enrichment.

A name is an identity and a signal of cultural belonging.

A name is an adjective that allows for judgement, exclusion and discrimination.

A name is a source of empathetic knowledge.

A name is also the beginning of a conversation.

On this National Day of Remembrance and Action on Islamophobia, the Peace and Reconciliation Centre (PARC) honors the names bestowed on the six Muslim worshippers who, four years ago, were shot dead at a Mosque in Quebec while in worship. 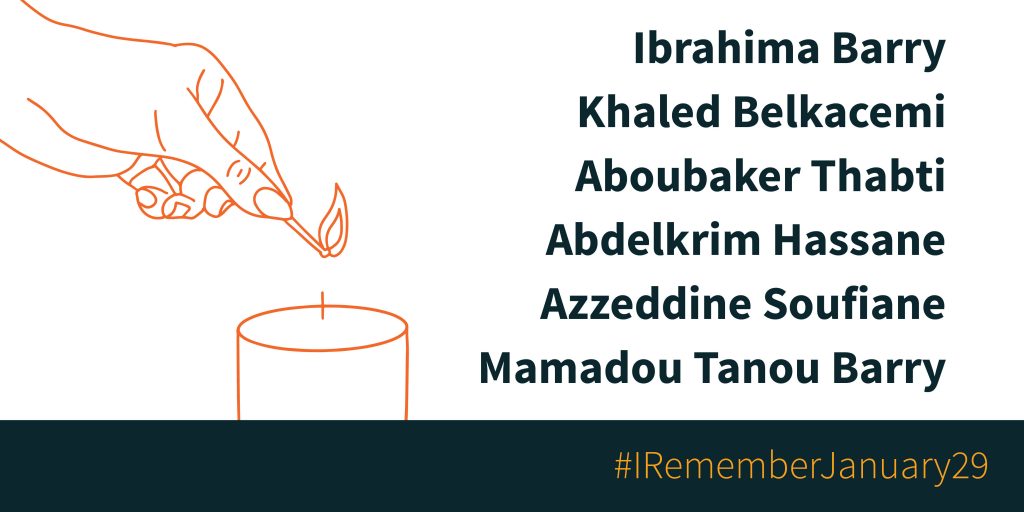 Ibrahima Barry. Ibrahima is a derivative of the Arabic language and is loosely translated to mean “father of nations.”

Mamadou Tanou Barry. Mamadou is a variant of the Arabic name Muhammad. The latter can be taken to mean “praised.”

Khaled Belkacemi. Khaled is of Arabic origin and means “eternal.”

Aboubaker Thabti. Aboubaker has multiple Islamic meanings one of them being “noble.”

Abdelkrim Hassane. “Servant of the generous” is the meaning of Abdelkrim. A name of Arabic tradition. Hassane is related to the Arabic name Hassan, it means “good or benefactor.”

Azzeddine Soufiane. Rooted in Arabic the literal translation is “glory of religion.” Soufiane, also of Arabic descent, is translated to mean “sincere” or “devotional.”

Islam is the name of a religion. Islam is an Arabic word that means “submission to the will of God.” In the theology there is very little that would clash with Christianity and Judaism, for Islam too is an Abrahamic faith.

Islamic belief at its core is a thinking, monotheistic faith that sees the spiritual and material worlds as inextricably linked. The Islamic concept of human being is one of intellect and ethics and the role they play in the lives of the development of Muslims.

However, in the Western world Islam is too often seen through a sensational media lens.

And what is highly abnormal violence perpetrated by an extremely small minority—in the Islamic world of roughly 1.8 billion faithful—is mistaken for Muslim mainstream. Rather than seeking to understand, opportunities for learning are replaced with fearful ignorance. It is precisely such misperceptions that inspire incomprehensible acts of hatred against Islamic believers, such as the Quebec shooting and others.

The aforementioned forces of fragmentation dangerously contribute to stereotyping. One way to address this is through increasing knowledge of Islamic cultural traditions and contributions so they become general knowledge in Western society.

Islamic thinkers made significant, often cutting-edge contributions in the fields of mathematics, medicine and astronomy that helped to shape and benefit the world. Yet these achievements are often ignored in occidental societies.

Al Khwarizmi, the Persian mathematician, is the founder of Algebra. The Compendious Book on Calculation by Completion and Balancing is an Arabic treatise written by him and centuries later translated into Latin, as were his astronomical tables.

Al Azhar, which means “most luminous,” is one of the world’s oldest universities and was founded by the Fatimids. The university is situated in Cairo.

Ibn al-Haytham, an Iraqi mathematician and physicist of the Islamic Golden Age made seismic contributions to modern optics. Between the eighth and fourteenth centuries AD, the Golden Age flourished. That period saw the first appearance of horizontal windmills. The Oud, a musical string instrument was invented, and over time it paved the way for the creation of European Lutes.

Islam and the west are often described as being at the crossroads of a clash, but perhaps this is better thought of as a crossroads of ignorance. A central theme at PARC is to encourage people to think ethically and with open minds. When elements in society move in undesirable directions, institutions such as universities have an obligation, and an opportunity, to contribute their research and teaching to better inform the world about Islam. With knowledge we can build understanding, and with understanding we can lay the foundations for peaceful and respectful relations.

Illustration by Celina Koops, as part of CHASI’s ongoing series acknowledging some of the significant annual observances that align with our core values.